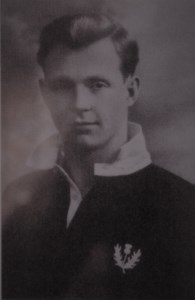 The club is saddened to hear of the death of Scottish Rugby internationalist and former pupil of Daniel Stewart’s College Keith Macdonald (DSC 1951) at the age of 88 on 20 September 2021.

At school he played for both the cricket 1st XI and the rugby 1st XV in 1949/50 and 1950/51 and became the first pupil from DSC selected for the then annual rugby schools match v England in 1951 which unfortunately was cancelled due to adverse weather. Another future Scottish internationalist, Gregor Sharp, played in the same 1950-51 1st XV.

Known within rugby for being a hard tackling centre he won six caps for Scotland making his debut in the home 12-0 victory against France in January 1956. He played in the subsequent international games that season against Wales and Ireland but was forced to withdraw from the Calcutta Cup on the eve of the game through injury He had won his selection by progressing from the school inter-city in 1949 and 1950, the RAF against the Army in 1952, five Scotland trials and district rugby with Edinburgh.

The following season 1956-57 he only returned to club rugby in January 1957 but made such an impact that he was back in the international team for the 9-6 victory against Wales at Murrayfield one month later and retained his place in the losses to Ireland and England. He was further honoured by being selected for the Barbarians’ Midlands Tour sandwiched between his final two Tests, one of five Scots who played in a 24-14 victory over East Midlands at the end of February 1957. In 1958/59 he was selected to partner club colleague Grant Weatherstone against England but had to withdraw from the team on the morning of the match.

As a centre his play was characterised by strong running with a powerful hand-off and, in defence, by his tackling; the latter quality being put to good effect by Scotland at a time when their attacking capabilities were seldom to the fore. The “Daniels” publication of 1973 records that he would have surely won many more representative honours but for recurrent injury problems. After retiring from the playing side he served on the committee of the Stewart’s FP rugby club for several years taking his turn watching the lower fifteens as well as the 1st XV.

The club extends its sincere condolences to all Keith’s family and friends.