A few changes saw a reshuffling of the pack (no pun intended) but it seems like we have a recurring theme with strength in depth. This is the fundamental core of our squad together with the spirit of this team. As the poignant lyrics of the Waterboys, "Man dreams, the spirt lives, what spirit is man can be!"

No dream on Saturday only reality with a resounding victory saw seven tries and a bonus point against physical and feisty opponents who, ironically, probably scored one of the best tries of the afternoon.

On a dry sunny day on perfect pitch conditions (albeit a blustery wind) Falkirk started well after SM failed
to secure the ball at the kick-off giving them some impetus in the early exchanges. SM however soon got things going, regaining possession, winning a penalty, resulted in a strong drive after a successful line- out, and Darren Miller was over for his first try of the afternoon. Happy’s boot added the extras. 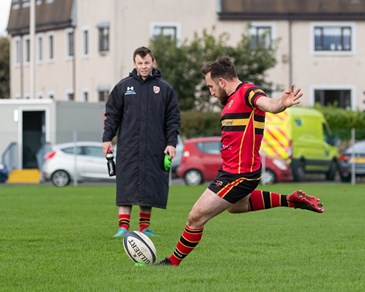 se ball at the restart gave Falkirk an opportunity once more and within five minutes a penalty and 3 points SM 7 – Falkirk 3.

There was an immediate response from SM, almost a carbon copy of the first try, and with around twenty minutes played, Darren was over again. SM 12 – Falkirk 3. Yet another poor restart from SM’s perspective gifted Falkirk possession once more and with a simple and effective midfield move their number 12 ran in for a converted try with around 23 minutes on the clock SM 12 – Falkirk 10.

SM didn’t help themselves by another poor restart giving Falkirk some momentum but this was soon dealt with and possession was regained, James Ferguson leading the midfield charge with Kyle Henderson on hand. Whilst the penalty did come in SM’s favour Kyle had to the leave the field after a HIA.

Further changes meant George Lee (a man who revels in the contact) moving to the stand-off berth, Sean Murchie dropping to full back and Aaron Porteous coming off the bench on to the right wing. Only a brief period of settling in was required as Sean managed to weave his way through the Falkirk defence for the third try of the afternoon at around 30 minutes. SM 19 – Falkirk 10. 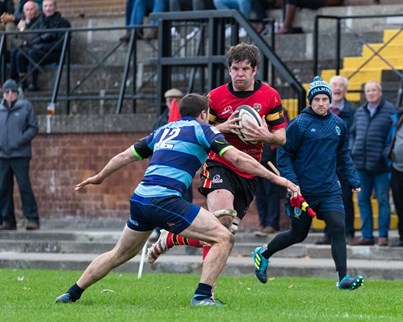 Now playing with a bit of confidence and a good restart, SM were subsequently camped for a prolonged period 5 metres out from the visitor’s line and a penalty try was soon awarded. 37 minutes SM 26 – Falkirk 10. Rory Anderson had now joined the action for his first team debut, a hard act to follow Ru and Darren, but he certainly did his job. As half time approached Falkirk had more possession but could not break down the resolute SM defence.

With a reasonable lead established there was still no room for complacency as Falkirk started applying their own pressure in SM’s half and with numerous penalties coming their way, they had more momentum once more. A massive "man and ball" hit by Happy put an end to it all and as more breathing space was welcomed, it was SM’s turn to apply the pressure, George Lee and Aaron Porteous showing their pace and thereafter allowing Sean to finish off.

SM were looking more in control at this stage using the boot to effect despite being on the wrong side of the penalty count. Resetting of scrums slowed things down for a period but with penalties regrettably taking precedence, it was defence that was key. The first yellow card came, Falkirk the recipient, at around the 60-minute mark giving SM the opportunity to exploit the one-man advantage which they did, James Ferguson finding Brendan Scott on the wing who touched down in the corner. 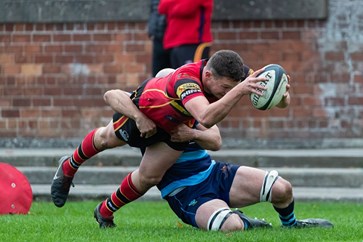 With 15 minutes left Falkirk were being restrained in their own half and despite SM also being yellow carded they dealt with everything they had to and more, launching yet another successful attack with Willie Malcolm clinging on to a quarter back style pass and finding James who had the final say. SM 43 – Falkirk 10.

As always, many positives. The tempo, quick hands (including some unorthodox passing), defence and even the kicking game - when needs must. Everyone played their part. Happy’s boot was challenged by the blustery conditions. On another day it would have been 6 out of 6, I am sure!

Great to see Matt Sanderson back on fire, athleticism personified, along with the hard graft from Ruaridh Stewart. Darren Miller as always giving his all along with a couple of tries. Hopefully his injury will not keep him away for too long. Unfortunately, the penalty count was not in our favour and this is obviously best kept to a minimum, for,  difficult as it may be, the Referee’s decision, right or wrong, is final and nothing will change that. T'was always thus!

Maybe back on track ........ definitely back on the road with Gordonians in Aberdeen on Saturday - one game at a time. 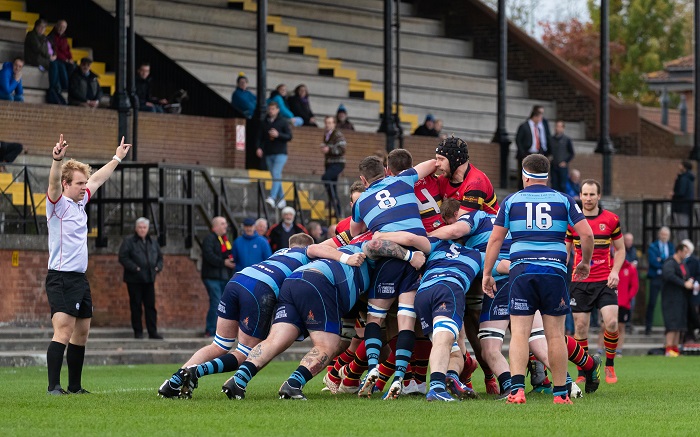 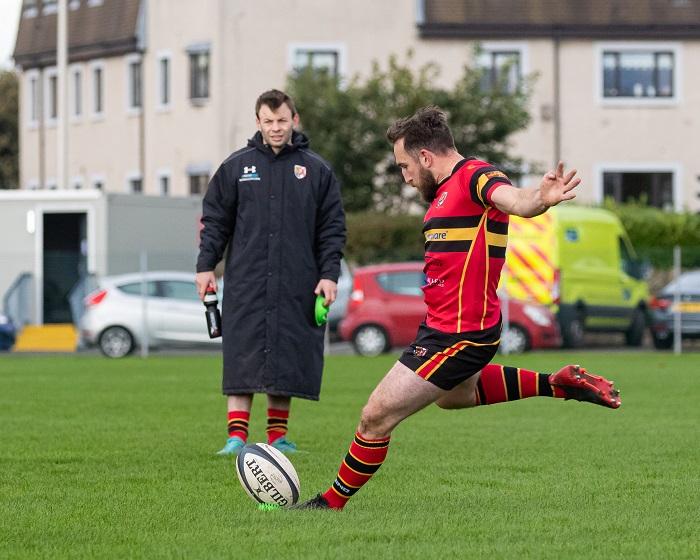 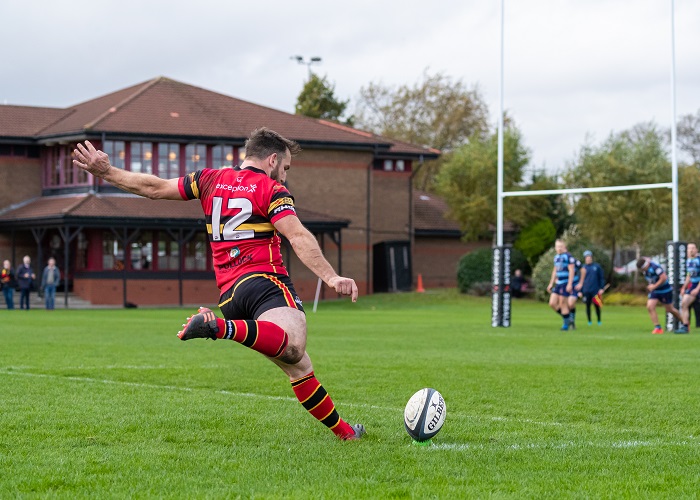 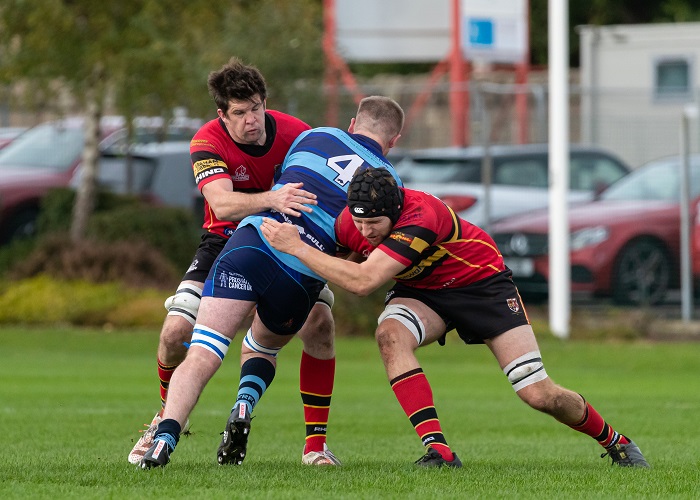 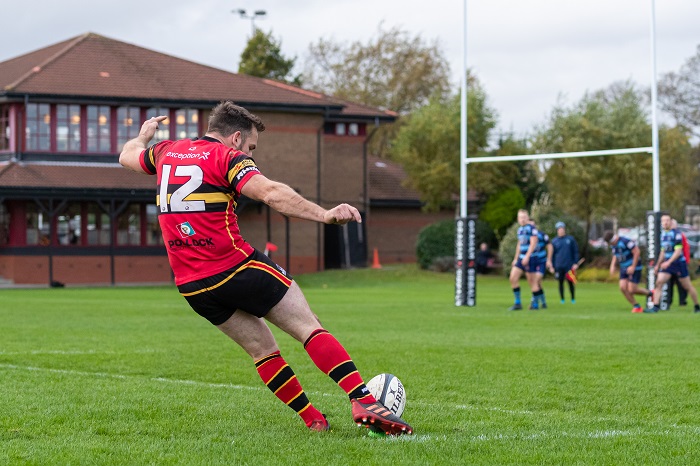 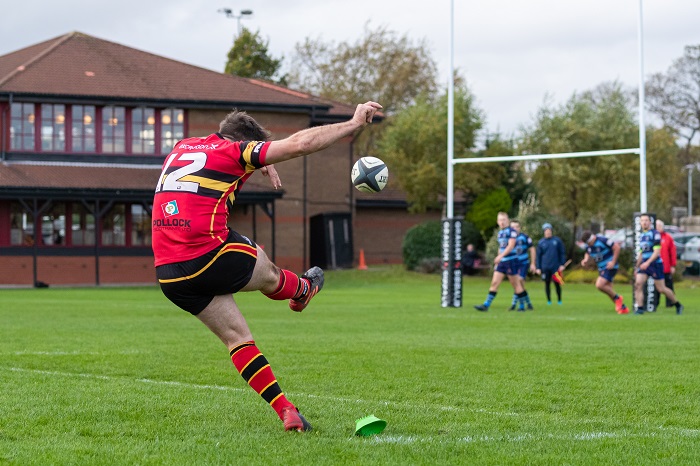 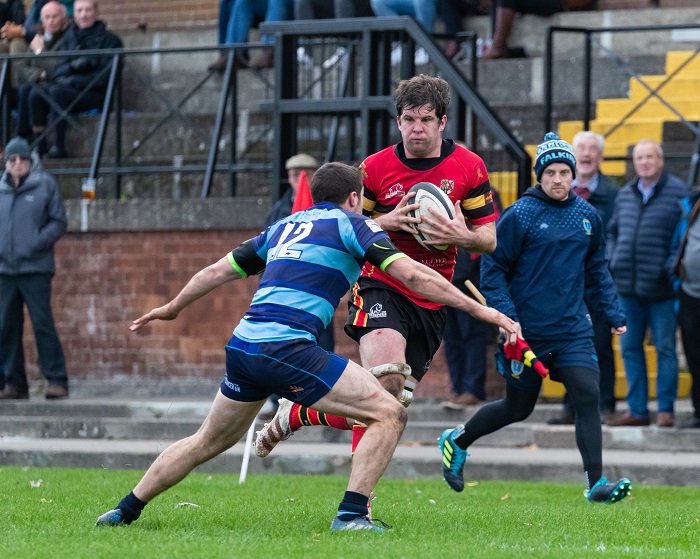 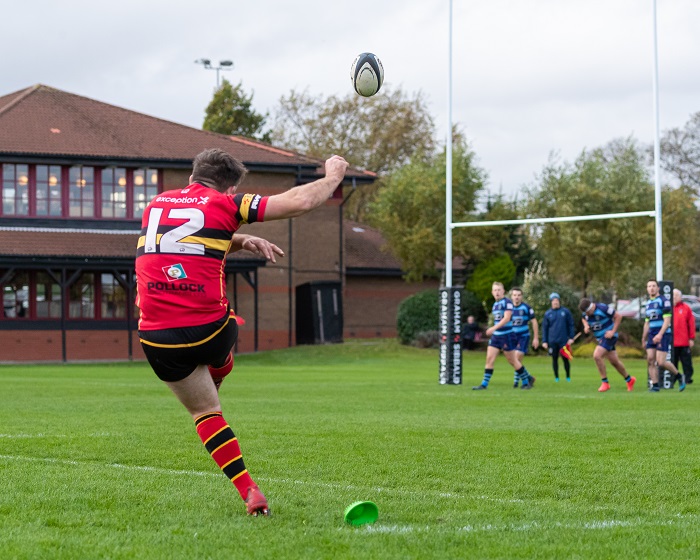 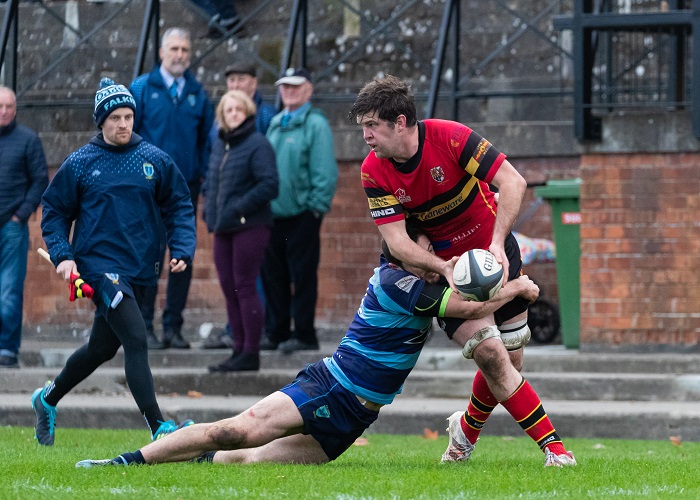 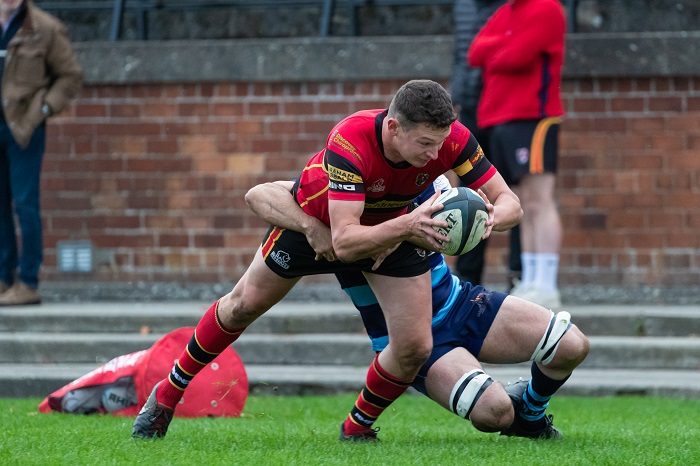 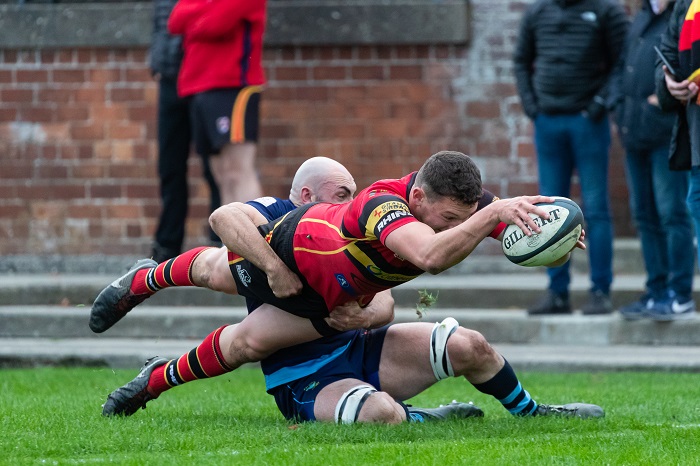 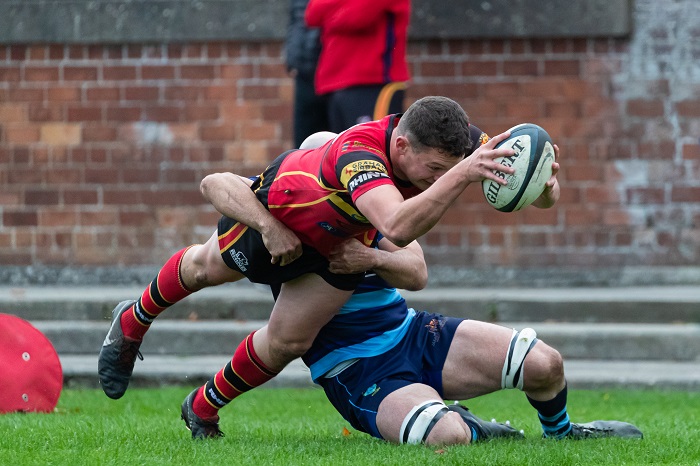 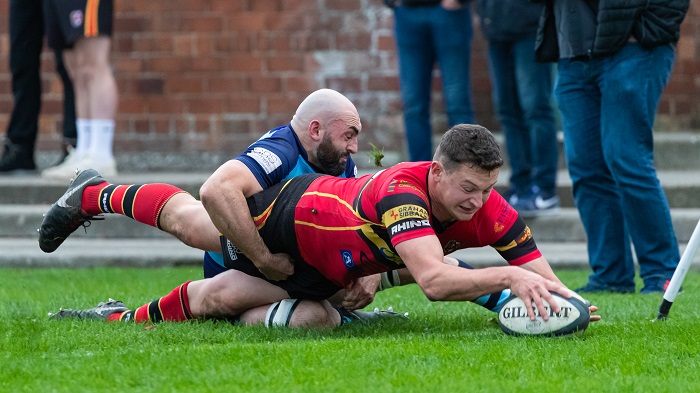 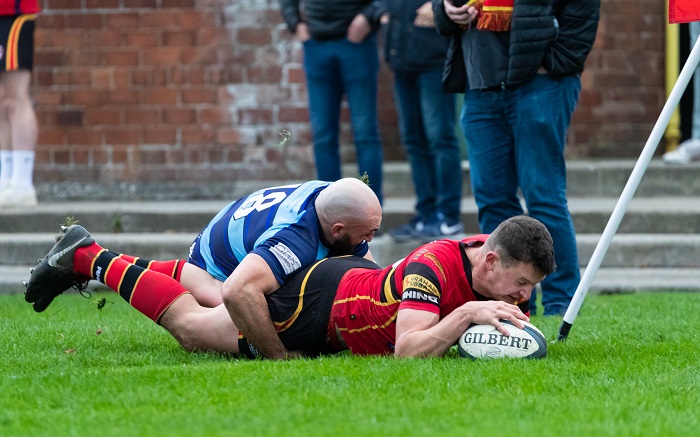