The merry go round of results continues in this very competitive league.  GHK are now clearly well in front and understandably so, particularly given their performance in the first half on Saturday in what can only be described as challenging conditions.

A convivial pre-match lunch was enjoyed by all at a venue almost as good as Invers!  The Q&A, with GHK head coach Peter Wright, was also interesting as he suggested that the outcome of the match would be down to two factors: the ability of both teams to manage the weather and the referee.  Never a truer word has been spoken!

SM started with Storm Malik at their backs but it was GHK, playing into the wind, who looked to have the advantage as the conditions gave them no choice but to keep the ball in hand.  This was something they did particularly well and it certainly gave them an attacking edge - in contrast to SM’s kicks which were wind assisted and therefore difficult to judge effectively.  With around 15 minutes played the pressure from the hosts paid off as they rumbled over for the first try of the afternoon.  GHK 7 – SM 0.

The penalty count was not in SM’s favour and a yellow card came our way not long after.  GHK’s one-man advantage was immediately exploited and, with around 25 minutes on the clock, GHK touched down once more.  GHK 14 – SM 0. 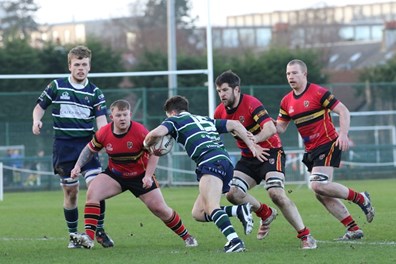 Injuries to Willie Malcolm and Niall Hall didn’t help matters and, despite us making some inroads into the hosts’ half, GHK were soon back in the ascendency with another score.  That made it GHK 19 – SM 0 after 35 minutes.

Stew Mel heads were certainly not down, though, and a period of relentless attacking followed.  With the penalties now being awarded in our favour, we scored just before half time with Chris Baikie powering over.  Kyle Henderson’s boot added the extras.  At half time it was GHK 19 - SM 7.

As the second half kicked off it was SM’s turn to brace against the gale force wind - and we did so successfully.  With 42 minutes played, Danny Morrison made significant ground once more, allowing Jamie McGurk time and space to slalom his way through the otherwise robust GHK defence.  The upright prevented the extra two points but things were looking up - GHK 19 – SM 12.

Game on, for sure, and interplay between our forwards and backs was beginning to play its part, with the turnovers coming our way at last.  Knock-ons, as they tend to do, prevented any further progress, however, and, with GHK retaining possession well, the referee’s patience was tested and a penalty try was eventually awarded.  55 minutes gone, GHK 26 – SM 12.

There was still plenty left in the SM tank but, unfortunately, the momentum was lost as another yellow was shown to Ru Mitchell (it seemed harsh, in truth).  GHK then made good use of the wind with a probing kick from their own 22 finding touch 10 metres from our line.  Their line-out functioned well, as did their drive over.  With 60 minutes played it was GHK 33 – SM 12. 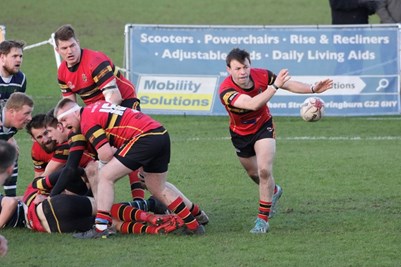 Once back to our full complement, another try came our way courtesy of the ever-alert Geoff Angco to close the gap once more.  Final score GHK 33 – SM 17.

We knew it would be tough and sometimes things just don’t go the way we had hoped.  A makeshift back row due to injury is never going to help the cause, particularly when up against such a well drilled GHK unit.  In summary, GHK were the better team on the day and their league position says it all.  We, however, are still the hunter - but also the hunted!

Despite the loss, it was a spirited performance and our defence was excellent at times.  I do not think I have seen more tackles made in any game this season!  GHK can run the ball from anywhere and we should not be despondent.

Next up is the key game against Dumfries Saints on 19th February at Inverleith. 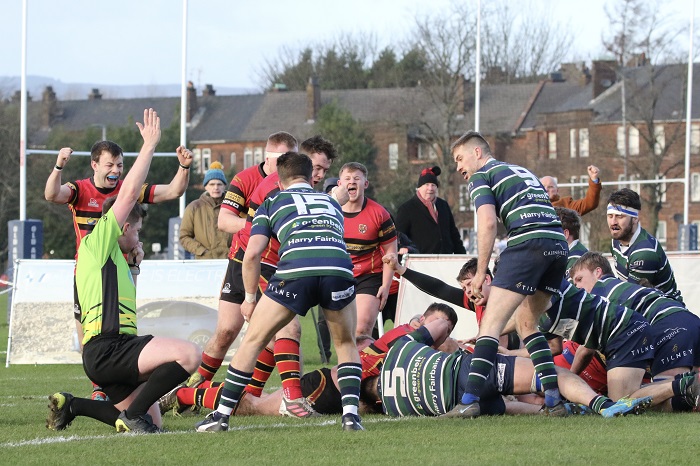 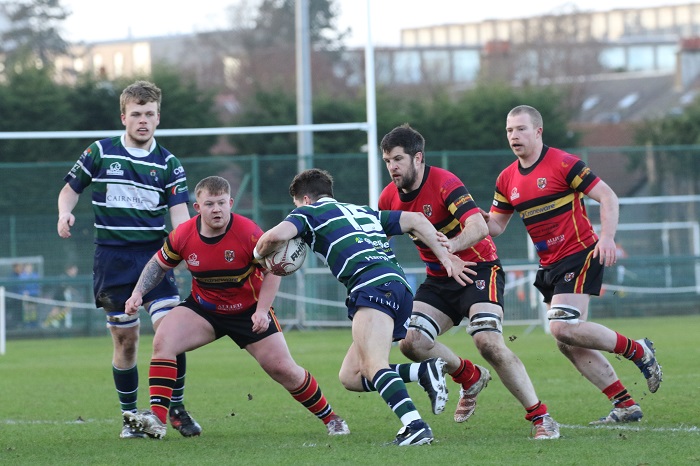 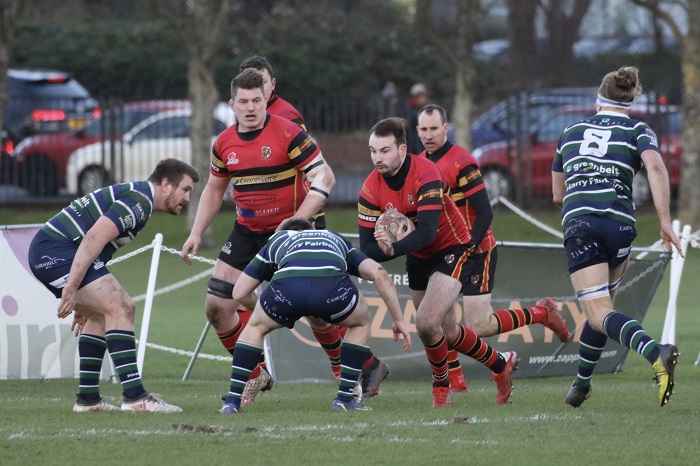 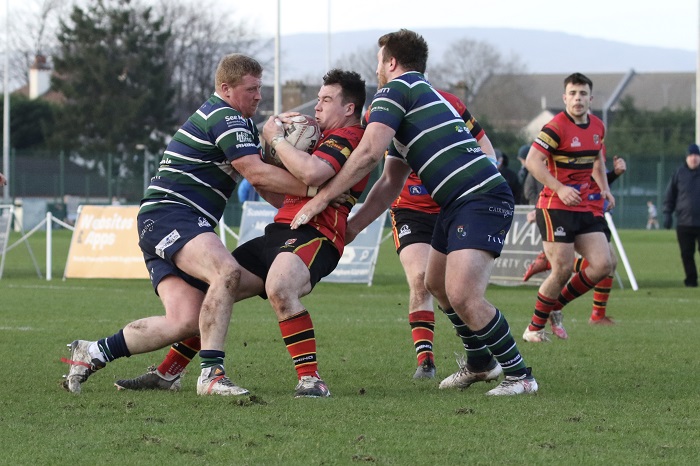 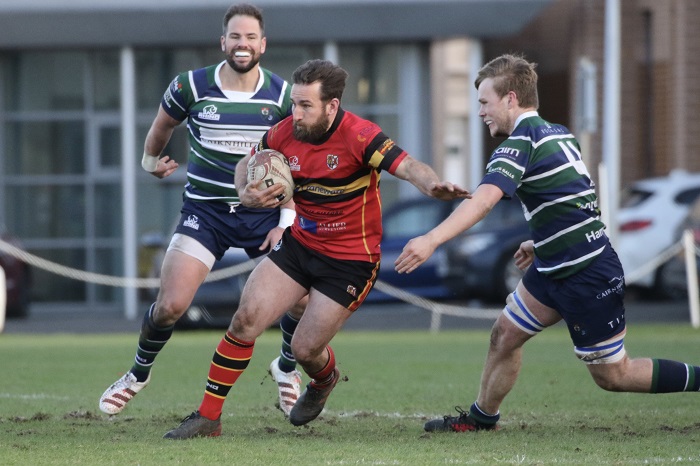 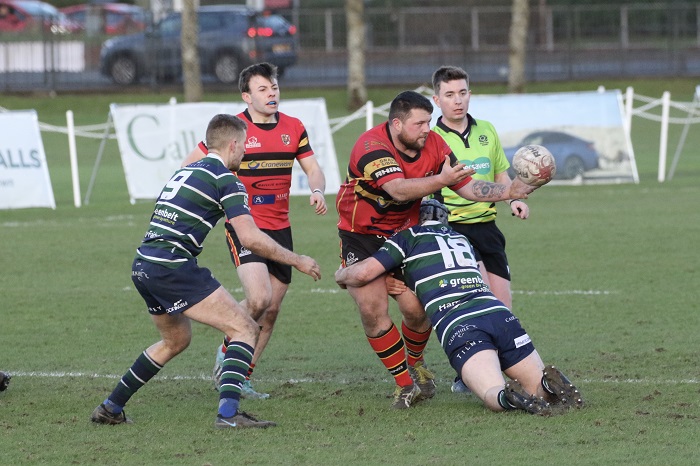 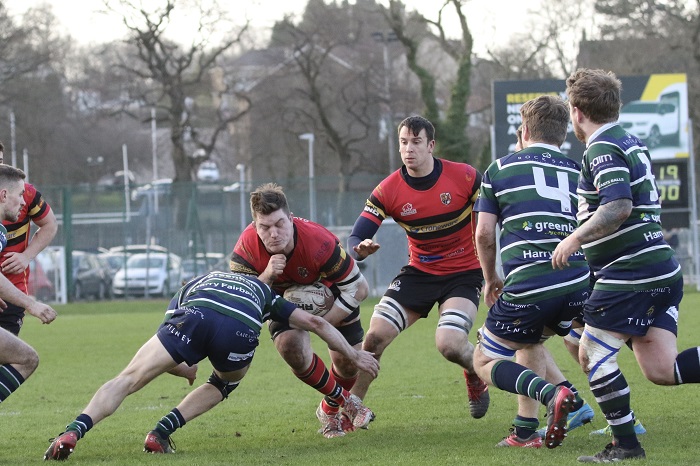 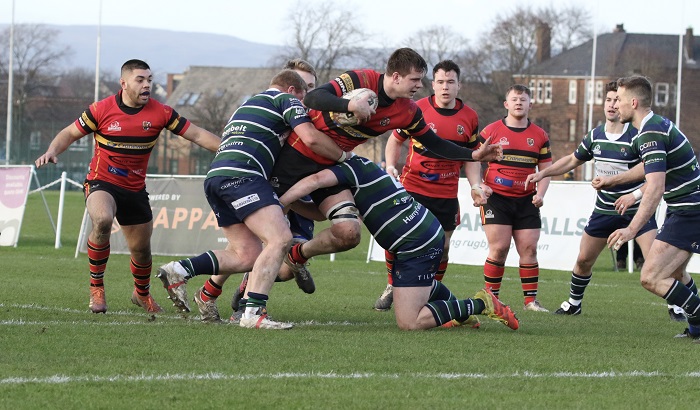 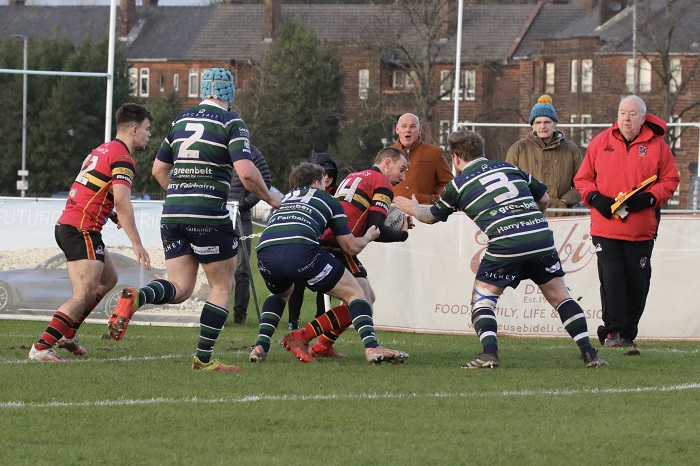 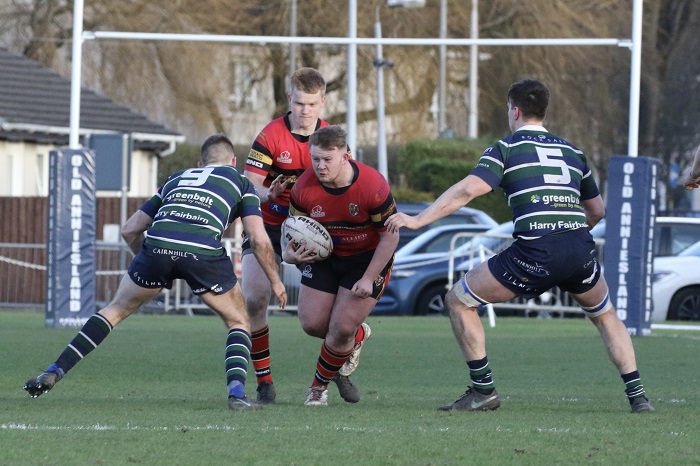 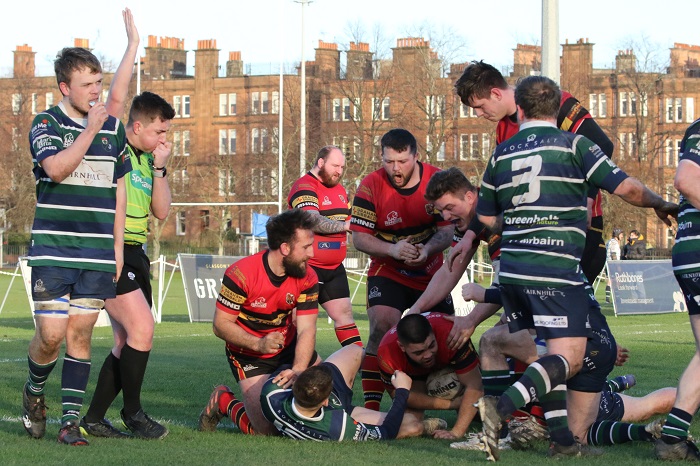 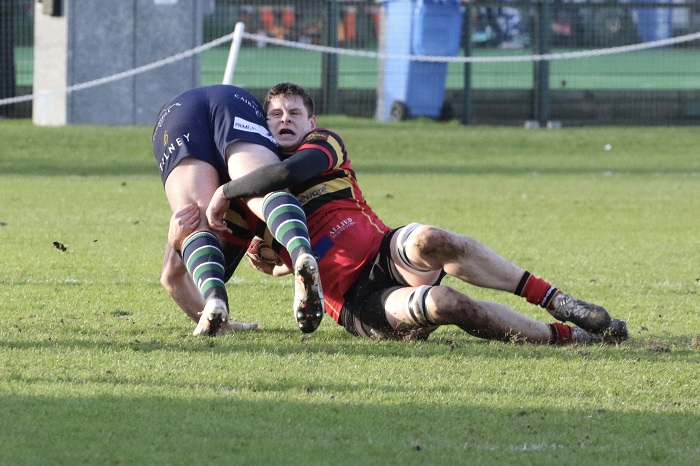 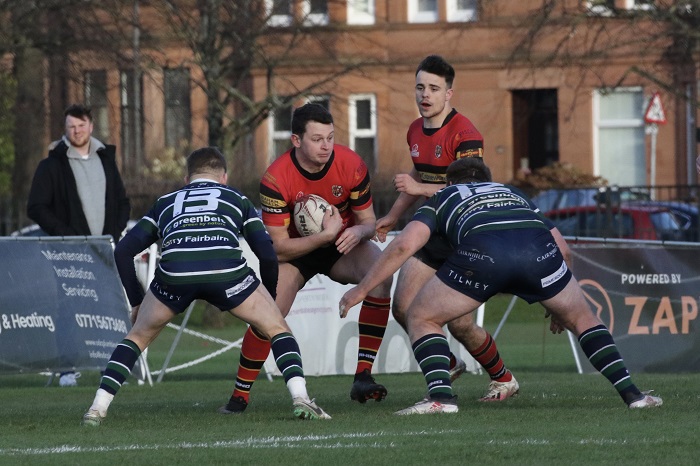 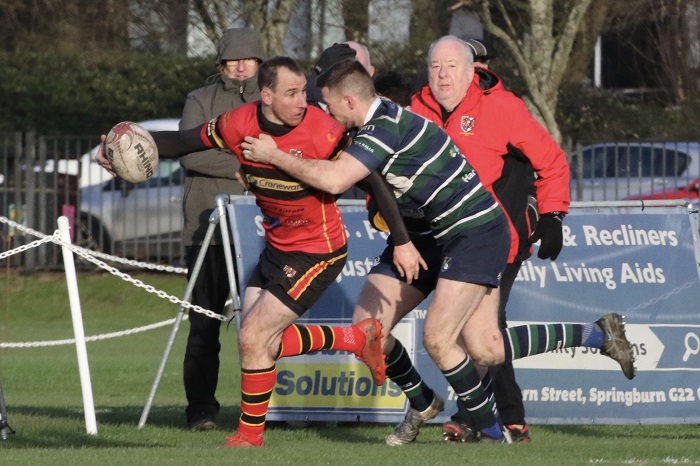 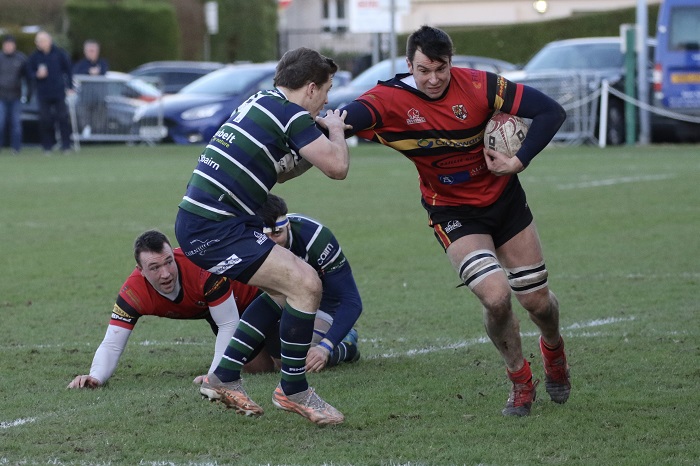 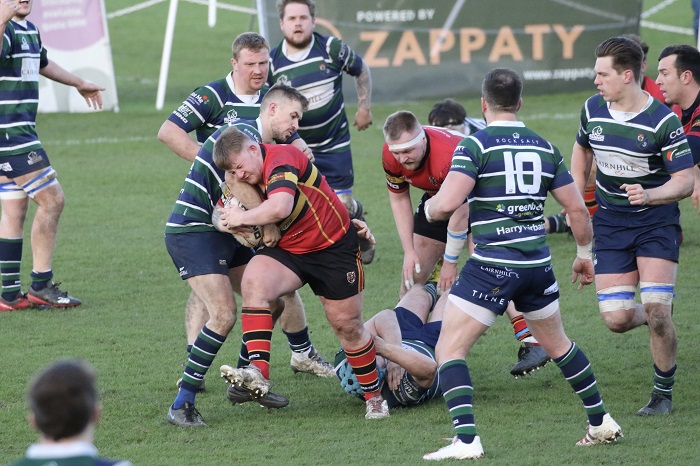 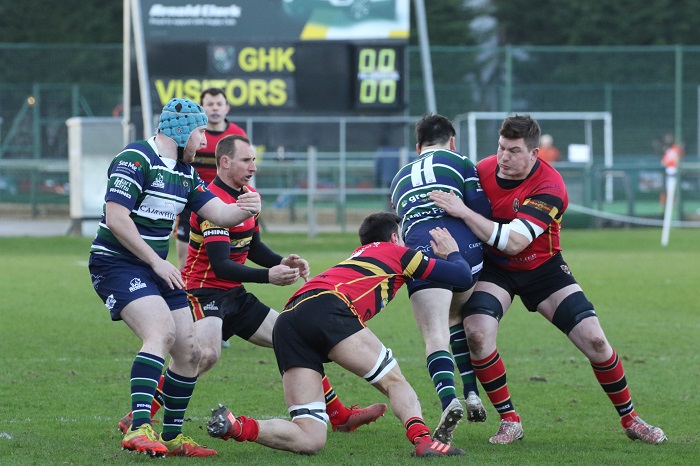 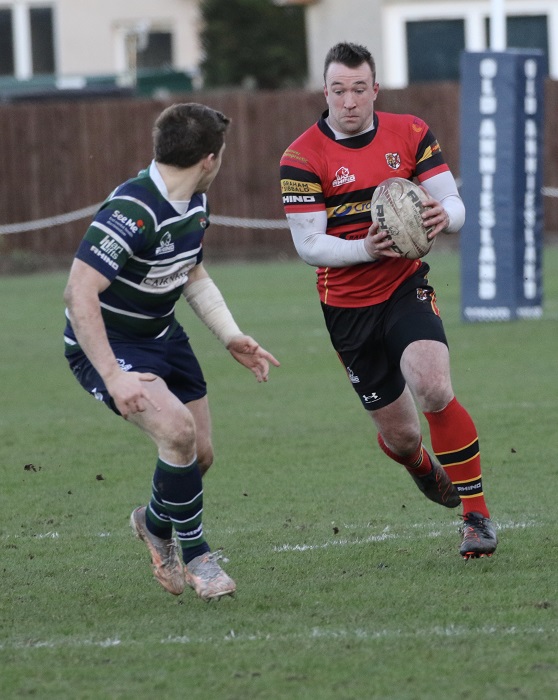