As GHK headed back along the M8, possibly licking their wounds as their unbeaten run having come to an end, they would have been consoled by the fact they are “Still on Top”.

Perhaps ill-discipline let them down on Saturday, something we are all guilty of, but they are easily one of the best teams in this league and will certainly be looking forward to the return leg. They are not only a very good team, they are part of a very good club.

The game was fast, furious and played in great spirit. 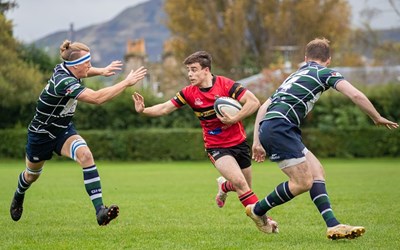 Within 10 minutes of the start SM were up by 7 points courtesy of Niall Hall ( former GHK ) and Euan Bowen’s boot. But these were early days and with nothing in it GHK took advantage of a penalty and some territory before coughing up possession due to a knock on. The resulting scrum, on the half way line, set the tone for what was to come for our pack completely dominated that aspect of the set piece from start to finish. Chris Baikie, Danny Morrison, Darren Miller, Roo Mitchell and James Bradley all took their turns up front and were absolutely outstanding both in the set piece exchanges and also in open play too. Danny Morrison, for me, easily the finest forward on the park.

But despite working on rations on the back foot, GHK were soon back in attack mode with their right winger looking particularly dangerous. An injury to Jamie McGurk, with around 20 minutes played, meant Kyle Henderson was introduced once more as GHK continued their attacks using the full width of Inverleith at every opportunity. A penalty soon came their way and the decision made at this stage of the game, rightly or wrongly, was to take the three points. 25 minutes in SM 7 - GHK 3. An aerial contest then followed the restart with SM temporarily winning and retaining possession and although GHK regained, they knocked on. Another scrum, which by this stage SM were beginning to get the upper hand, and with that came the penalty. As good as our scrum was the line-outs didn’t quite work to our advantage allowing GHK some breathing space and a penalty award this time in their favour. The GHK attacks continued both left and right but only to be penalised. When the referee’s decision was questioned, he marched them back in no uncertain terms! It wasn’t long before the first yellow card appeared and with five minutes left in the first half, the one-man advantage was exploited with Willie Malcolm burrowing over.

As the second half resumed in earnest, Captain Momo was unfortunately taken off after a head collision leaving him in the stars momentarily and forcing him to retire to be replaced by Ally Scott. As the numbers were soon back even, the contest sprang into action once more with three tries coming within a period of no more than 10 minutes. First GHK, after a deft chip, touch down for an unconverted try. Then it was the turn of SM, after a break down the blind side by the ever-present Willie Malcolm, who gave Brendan Scott space before off-loading to the rock-solid George Lee, who touched down. Sixty minutes in SM 21 – GHK 8.

It wasn’t long however before GHK were given a similar opportunity with slick hands allowing former SM winger, Jack Somerville, to run in, unconverted. SM 21 – GHK 13. It was now time for Ruaridh Mitchell to shore up the scrum for the final fifteen minutes. No-one does it better. As waves of GHK attacks continued our defence coped well and when the final whistle eventually came it brought the curtain down on a pulsating match.

A superb performance all round. The defence was excellent being stretched by a dangerous looking GHK back division. Some of the kicking from both sides could have been better although it was pleasing to see the odd up and under. They usually work but the kick is only as good as the chase! Imperfection however is what makes sport so exciting.

Our backs are growing in confidence and versatility find themselves able to exploit situations due to the forwards giving them the platform they need. James Ferguson consolidates the three-quarter line in attack and defence. He has certainly come of age this season whilst Willie Malcolm defies his age and continues to impress. Danny Morrison is omnipresent. A real dynamo who never seems to run out of gas (unlike Europe !!).

So, it's another top of the table clash this coming Saturday against the Doonhamers at Park Farm to look forward to.

On the 29th February 2020 we played in the worst conditions imaginable - no matter what the weather holds this weekend, we must look to repeat that memorable day.