Climate change aside the average rainfall in Aberdeen twenty-four hours before kick-off was less than in Edinburgh and, surprisingly, a degree warmer! The Countesswells pitch too was in good shape and with clear skies overhead and no wind, Gordonians got things underway.

The first scrum didn’t take long in coming and with Connor McKay fronting up on his return, perhaps sooner than anticipated as Ru Mitchell was unable to make the trip, dominance was there. With quick, clean ball, the muscular Adam Greig was over within just seven minutes played. Gordonians 0 - SM 5

The hosts did manage a brief incursion into SM’s half however the visitors were soon back in the ascendancy dominating scrums, line-outs and open play but, frustratingly, after twenty minutes the score still remained unchanged. Two minutes later however again, with some good hands through the backs, Adam was in for his second try. It's just so good to see him back in harness!

More pressure was exerted by SM keeping their opponents pinned back although they did manage to clear their lines whenever possible it was apparent that the tide was slowly turning, particularly the penalty count which was not in SM’s favour. Handling mistakes were creeping in too, possibly the result of a slippery ball, making things tricky. As half-time beckoned, a searing break down the middle by James Ferguson found Sean Murchie and just as we thought we were in for our third score, the final pass to Adam didn’t quite materialise. 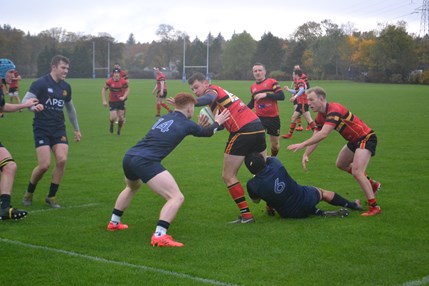 A good start to the second half, with territorial advantage, a line-out 10 metres out, and the forwards rumbled on. Willie Malcom this time taking the opportunity to touch down at around the forty-seven minute mark.

Changes in the back division saw Geoff Angco slotting into the centre, George Lee dropping to full back and Sean taking up the left wing. Geoff immediately involved in the action with some textbook tackling then out of the blue former Shire Captain, James Patterson, whom along with his current Captain Daniel Osuga, sliced through the SM defence resulting in seven points on the board for the hosts. As their confidence grew more gaps were found in the SM defence but the response soon came with James Ferguson powering over at around the fifty-five minute mark. Euan Bowen slotted the conversion.

Niall Hall was now on replacing Ally Scott who had has an industrious afternoon and deserved a well-earned rest. Gordonians at this point were gradually coming into the game and, at around the seventy minute mark, managed an impressive line-out and forward drive for another converted try. Gordonians 14 – SM 22

For the ten or so faithful supporters who had made the trek north things were getting a little bit close for comfort, not helped by a further penalty award giving Gordonians yet another three points. They were clearly after at least a losing bonus point with a five point deficit but time was on SM’s side. Some urgency was required and was duly delivered. Another break by James soon found Adam sending him in for his hat-trick. 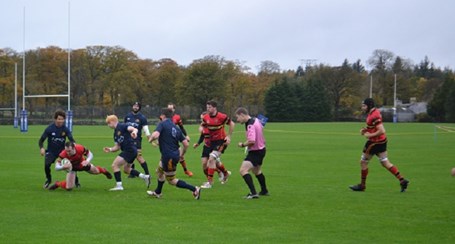 Despite their position in the league, Gordonians were certainly no push over. It was a hard fought win and at times difficult but the resolve was evident. I can only assume that the half time team talk from Gordonians was along the lines of “we are still in the game” as they sprang into life in the second half.

Not making excuses but injuries have taken their toll with a number of key players missing. Scott Alldritt, Happy Morrison together with our front row specialists Darren Miller and Danny Morrison all out but the flip side was the welcome return of Connor McKay and Niall Hall. Both made big impressions as does Rory Anderson who is clearly enjoying his moment in the sun. We're holding it together despite the injuries ....... keep going troops!

Five tries and a bonus point on the road regardless of how it happened is always welcome. Some things to work on but the foundations are absolutely in place. Home on Saturday against the Hamilton Bulls who will have been bellowing after their recent result against Peebles.

Yet another big challenge awaits.......but we can do this.