The tour party had packed in expectation of a monsoon, based on the weather forecasts during the week. The route chosen by the (excellent) bus driver hadn’t got our hopes up, either. After making rapid progress along the nice wide roads to Ayr, he then headed pretty much due south through the Galloway Forest Park. This was scenic but not exactly restful – single track roads, roaring torrents, hairpin bends, single digit temperatures and horizontal rain! Like something out of ‘Lord Of The Rings’, basically.

The weather started to brighten up as we dropped down towards Newton Stewart then on past Wigtown to Bladnoch Park. The non-playing members of the tour party enjoyed an excellent lunch at the new café in the nearby Bladnoch distillery, some sampling of the local malt helping to soothe the post-bus nerves. The pitch at Bladnoch Park was in good nick, with no standing water to be seen. As the game kicked off, Happy observed from the bench that the NS Number 8, a ‘pinball’ the last time we had played against him, had pulled up during the warm up, one of the locks replacing him at the back of the scrum. Given that we were without Scott Alldritt today due to injury, this was maybe no bad thing.

NS started the game at a high tempo, making lots of noise and perhaps hoping to catch us cold after the long bus trip down. We reacted well, though, a lineout steal and some neat interplay between forwards and backs earning us a penalty in front of the NS posts. The resulting scrum led to another penalty (the first of many in our favour at scrum time). Willie Malcolm took a quick tap and dived over for the score – only for the ref to chalk it off as he had noticed that one of our players was down with a head knock.

I gather that the score should probably have stood as the ref only noticed the injury after the ball had been touched down, rather than beforehand – not to worry, given the result of the game! We kicked the retaken penalty to touch but a turnover from the resulting lineout allowed NS to clear their lines.

We were now ten minutes into the game and NS had genuinely not been out of their half. Almost inevitably, NS then scored the first time they made it over the half way line, hard running by forwards and backs causing chaos in our defence. Their Number 8 may not have been on the pitch but there was plenty ‘pinball’ being played by his team mates. The ball was spun left and the NS winger ran in for the opening try of the game. The difficult conversion was missed and we were 5-0 down. 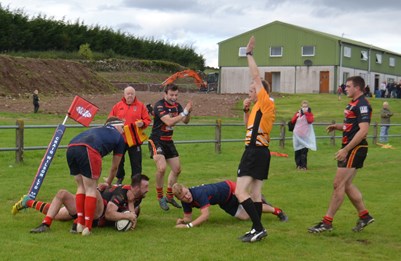 With 17 minutes gone, NS scored again, more missed tackles allowing one of the home centres to score out wide. The conversion was good this time and we were 12 points behind.

It is to our credit that we were then able to steady the ship and get some points on the board after a penalty earned us a lineout in the clubhouse corner of the ground. Our pack duly rumbled over with blindside flanker Max Hancock dotting down. Eubo added the extras to make the score 12-7 to NS.

NS came roaring back but we seemed to have got our defence sorted out, James Ferguson putting in some big hits to keep their rampaging full back honest. We nearly scored a few minutes later, a fine break by Momo almost playing his fellow lock Swordy in. The passage of play did, however, lead to a yellow card to one of the NS locks. This allowed our pack to reassert their dominance once again, a series of scrum penalties in front of the posts leading to a penalty try (but no yellow card, which apparently should have been the case – once again, every day’s a school day!) That meant we were now up 14-12.

Amusingly, the home centres had been sledging our backs just before the penalty try was awarded, asking if we fancied playing a bit of rugby rather than resorting to the dull up-the-jumper stuff. As our old coach Al Christie (almost) used to say, you can only play with the cards you have been dealt. More of the same, please, big lads!

The half time whistle came with us on the front foot once again, though this came to nothing after a good defensive turnover. Having replaced Big Ru with Chris Baikie during the first half to give Uncle Bulgaria a well deserved rest, we reversed the substitution at half time. What a difference it makes having that pair back in the squad – like Two Towers, to continue the Tolkien theme! 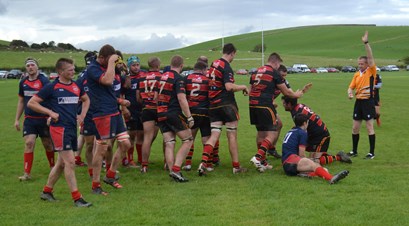 We began the second half as we had finished the first, adding a third try after ten minutes. This came from another tap penalty near the NS line, scrum half Aaron Porteous flicking the ball up for Adam Greig to batter over. No head injuries to consider this time, and we were 19-12 up.

The bonus point try came not long afterwards, the pack rumbling over after we were awarded another penalty near the NS line. Willie Malcolm claimed the try and Eubo added the extras to make the score 26-12 with maybe 15 minutes to play. After what happened against PL last week, no one was relaxing yet!

Coach Hardie rang the changes at this point, with Kyle coming on at 10, Eubo going to 15, Hamez going to the wing and Happy going into the centre. Baikie then did some further reorganising of his own, receiving a yellow after telling the ref in no uncertain terms that he rather objected to being pinged for straying offside.

NS continued to press until the final whistle but were unable to breach our much improved defence. That meant we had scored 26 unanswered points – impressive stuff.

Willie Malcolm was awarded the Man Of The Match Award by his team mates, and certainly did a magnificent job of filling Monsieur Alldritt’s large chaussures today. The pack, collectively, were excellent, rock solid in the scrum and well drilled in the lineout. Adam Greig was probably the pick of the backs, tigerish in defence and a constant threat with ball in hand, but all of the backs deserve credit for the way they got their defence organised after that shaky start. The NS backs are no mugs!

Our handling was excellent throughout, the ball constantly in movement to stop NS lining up their tackles.

I’ll leave the last words to the NS coach, who I spoke to after the game. After saying what a great player their full back was, he smiled and said, ‘I’d happily swap him for your pack!’

Back to Inverleith for a massive game against GHK this Saturday – see you there!