After the disappointment of the week before, it was pleasing to get back to winning ways with a bonus point victory against impressive opponents.

It was also so good to see Happy, Jamie McGurk and Niall Hall all back in contention while Captain Momo's presence was clearly still an inspiration despite him being side- lined due to concussion protocols.  SM kicked off towards the Castle in almost perfect conditions.  Within a minute, it was scrum time due to a NS knock on.

There was some territorial gain, a penalty for a high tackle and a lineout 5 meters out but the drive was eventually held up and NS managed to clear their lines.  Our lineout at this stage did not go our way but, thankfully, that was not to be indicative of the entire afternoon!  NS found themselves with good field position inside our 22 and, although a penalty came in our favour, possession was changing hands with the frequency of a poker game!

With neither side really having settled down yet, it was NS who took the lead with an early penalty.  SM 0 - -NS 3. 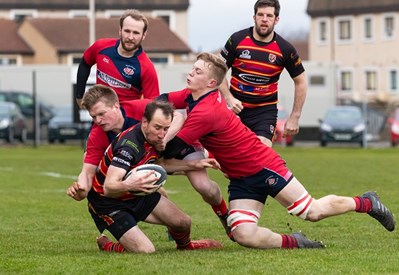 The kick at the restart didn’t quite have the legs and possession was back with NS once more.  Our visitors certainly didn’t look like a team that had travelled from the depths of Galloway that morning – in fact, it almost felt as if SM were the weary travellers!  There was an inevitability that the first try of the afternoon would come from the visitors who were moving the ball well and using width wherever the opportunity came to cut through the SM defence.

The try was a wake-up call and, as things began to settle down, it was George Lee who came out the trap door for our first try of the afternoon, converted by Kyle Henderson.  With 30 minutes played that made it SM 7 - NS 8.  Heads were certainly up and the play was better as phases were worked through and good field position was gained.  Quick ball was key following a good scrum as Aaron Porteous found Kyle in space before Sean Murchie came off his wing to break through and score under the posts.  The conversion was never in doubt.  35 minutes gone, SM 14 - NS 8.

As the second half got underway there was more confidence about us as the pace of the game increased. With better hands and less hesitancy, big James Ferguson made progress with his text book breaks - as did Jamie McGurk - but a combination of solid defensive work from the visitors and astute refereeing to spot a forward pass prevented any more significant progress. We were, however, showing improvement from both forwards and backs as the team continued to gel and, for a period, it was certainly all favouring the home side - but it certainly wasn’t all one-way traffic. 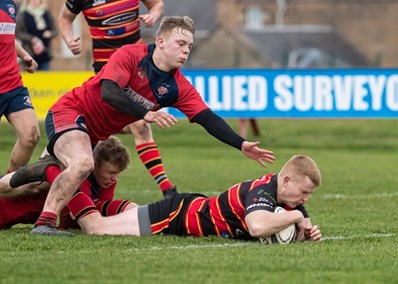 Both teams were playing with a similar tempo and on the edge which resulted in some basic errors appearing. A kickable penalty soon came NS’s way at around the 55 minute mark, allowing them to close the gap to 3 points.  SM 14 - NS 11.

That margin was short lived as we exerted more pressure, finding space on the blindside.  After quick hands allowed Sean in for his second, Kyle, from a difficult angle, slotted home a glorious goal!  With 60 minutes played you could sense some breathing space at last.  The Newton Stewart lads had come to play - and play they did.  Special mention should go to the ref who kept the game alive for both teams.  SM 21 - NS 11.

Adam Greig, Rory Anderson and Max Hancock joined the party but an injury to Danny Morrison forced his retirement.  The redoubtable Chris Baikie re-joined the fray.  Around the 65 minute mark another penalty meant a bit more of a cushion for us.  SM 24 – NS 14.

With our mojo back, it was clear that there was determination to keep the visitors at bay and the fourth bonus point try came courtesy of Chris Baikie.  With Kyle, again, adding the extras and at 70 minutes in, that made it SM 31 - NS 14.

The last 10 minutes was frantic as NS attacked, finding gaps at every opportunity, but it was too little, too late.

All credit to NS who played with verve, their skill levels and desire to play high tempo rugby more than compensating for any lack of stature.  No wonder they had won their last three games before arriving at Invers.  As we all know, it's not all about the 'size of the dog in the fight' ... they certainly showed that!

At the moment we are being hunted down by Preston Lodge and Dumfries (who secured good wins over Kirkcaldy and Whitecraigs respectively) but, this coming Saturday, we are the hunters!

Although GHK are a very strong side, let's go through and get stuck in for 80 minutes and enjoy the afternoon. 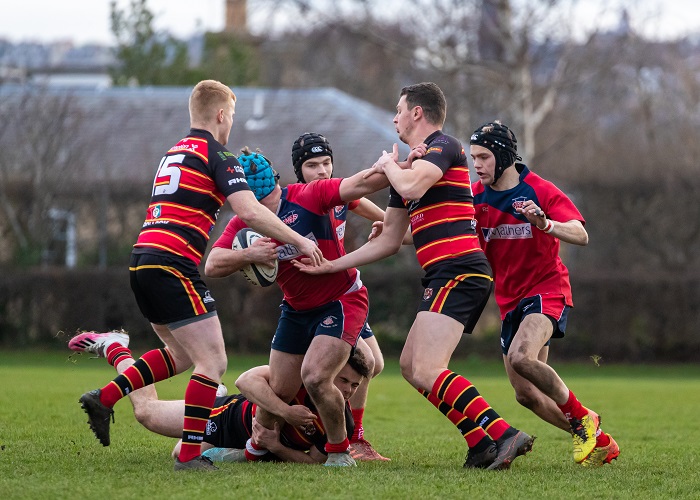 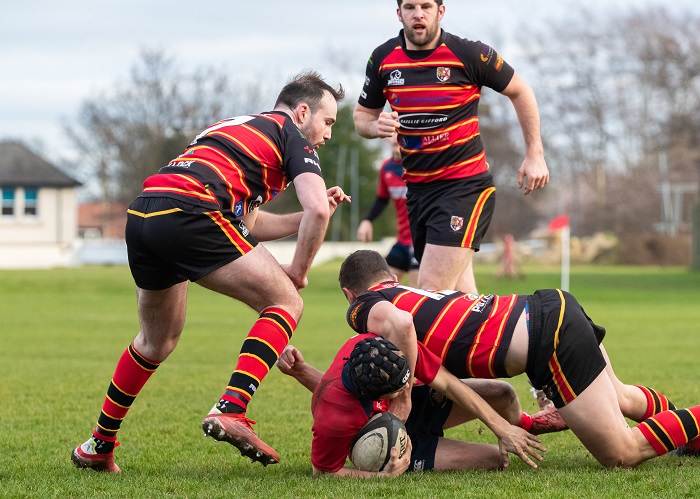 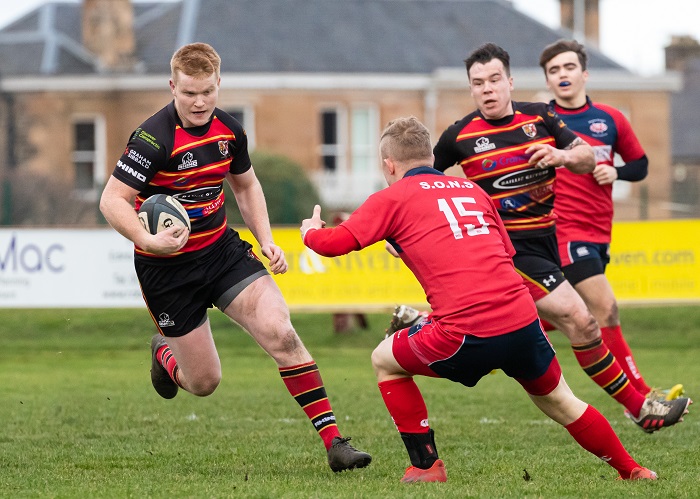 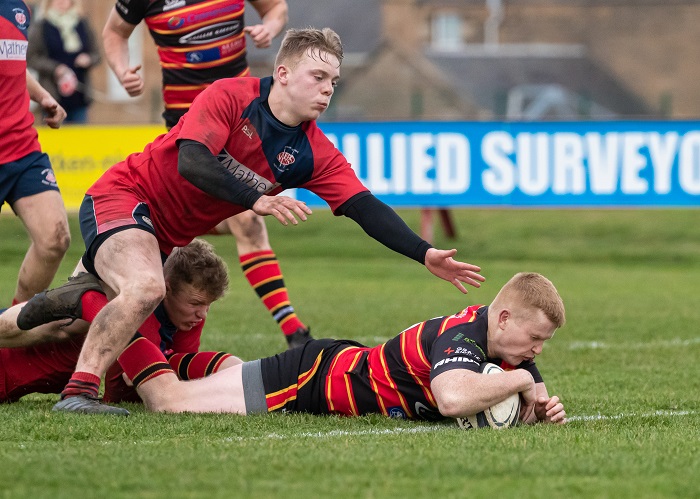 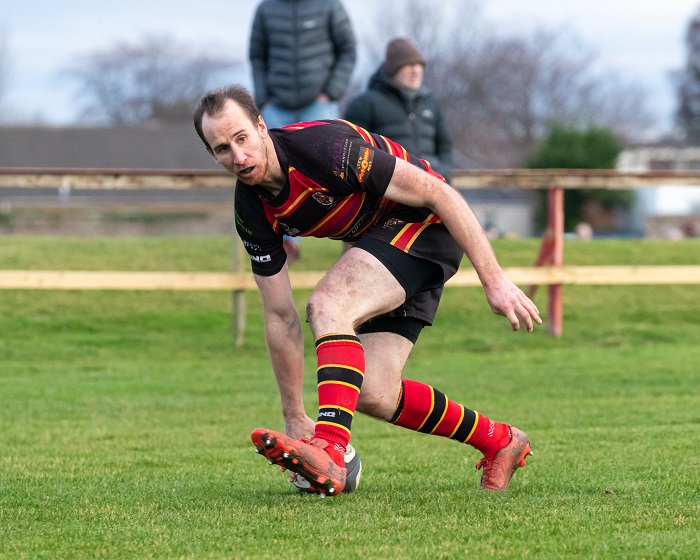 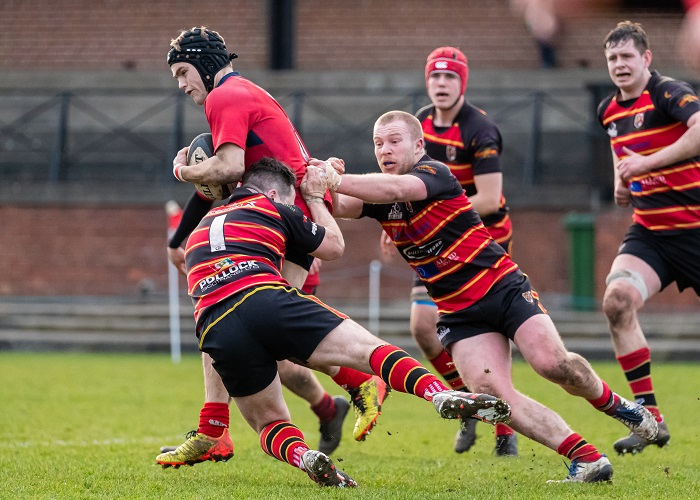 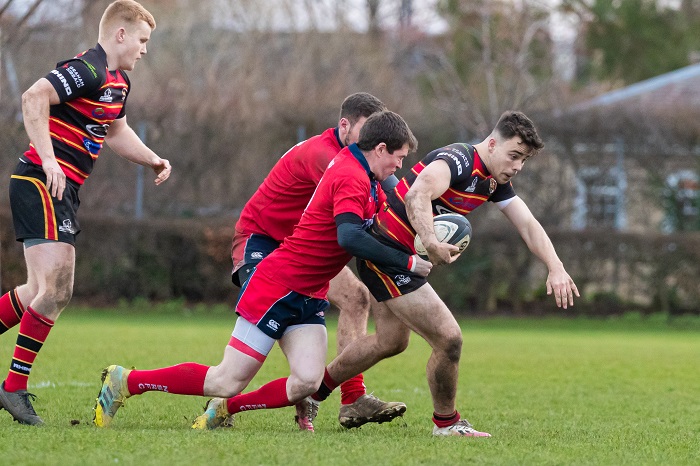 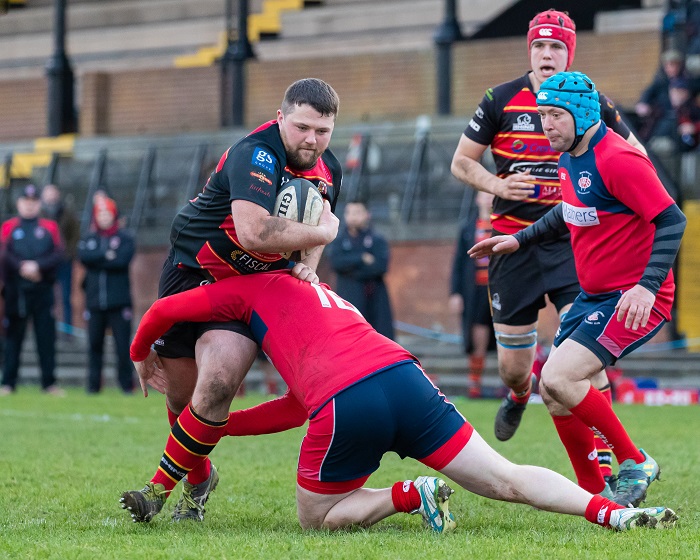 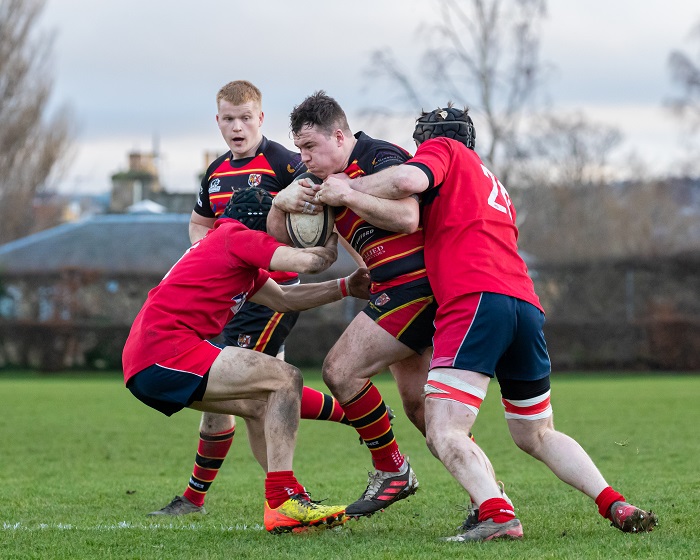 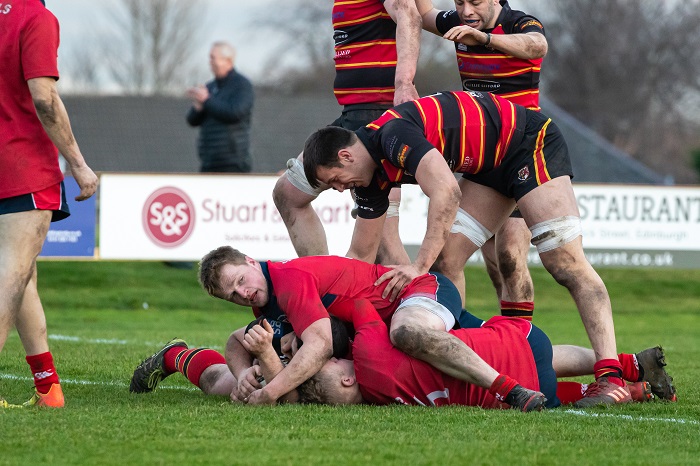 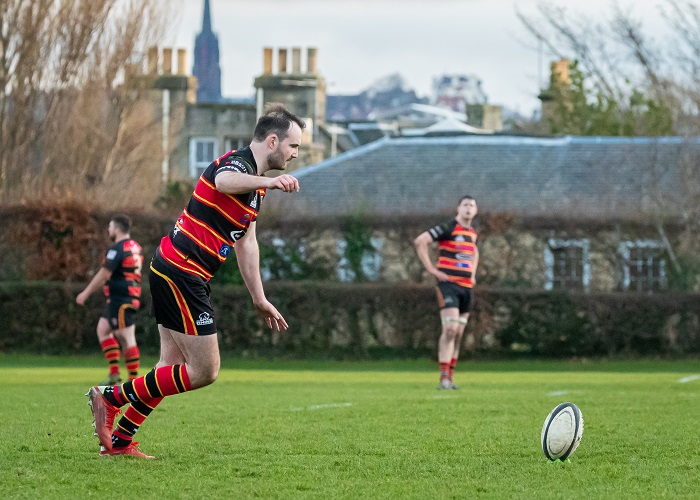 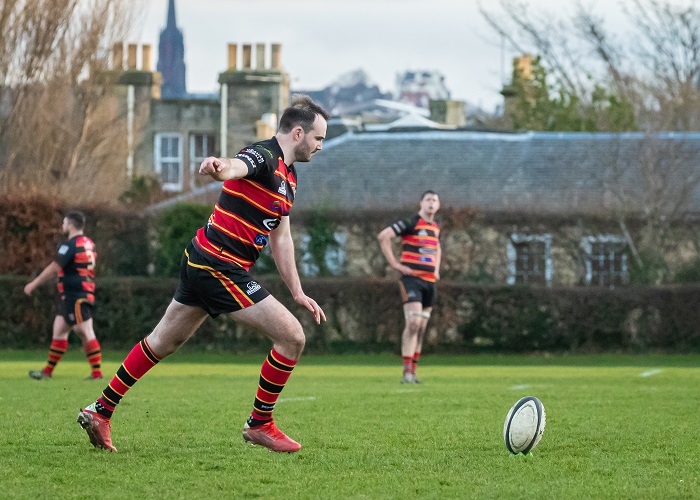 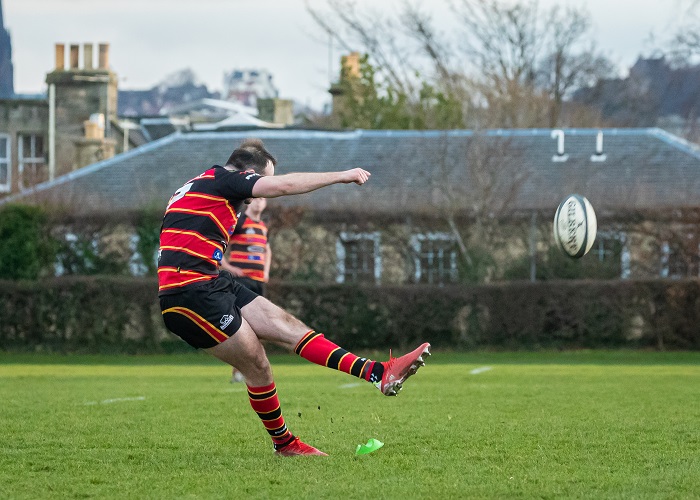 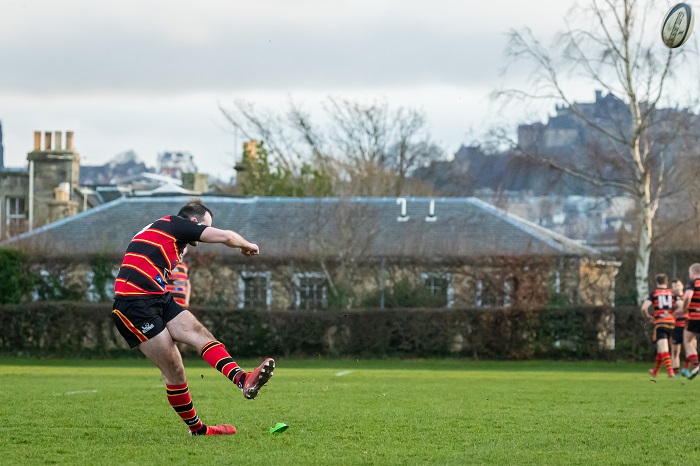