As we prepared to sign off this extremely challenging year, it was Peebles who came calling. Peebles matches historically mean only one thing - a hard shift is guaranteed. And so it proved!

With SM starting proceedings, playing towards Ferry Road, it was a scrappy, nervy start from both sides, although, in the possession stakes, it was the visitors who had the upper hand. Peebles were certainly showing intent in attack, keeping the ball in hand. Conditions were not ideal, with some mistakes creeping in during the early stages, and the ball was certainly not 'playing ball' with knock-ons aplenty. Even the kicking game was not functioning as planned.

It was a foretaste of what the next eighty minutes held in store. 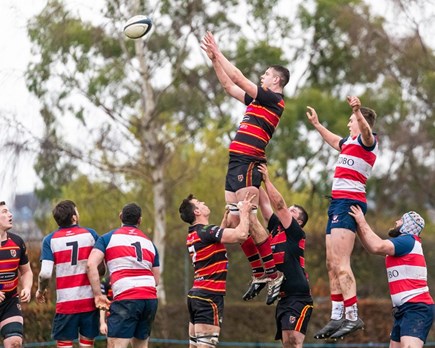 After ten minutes it was scrum time with the early signs suggesting that a tough contest was in store for both packs. With a penalty advantage coming the way of Peebles, they then found touch, enabling a possible attack. It didn’t materialise and, when the subsequent scrum engagement was considered to be early, it gave SM the opportunity for some decent field position. Although we recovered possession, a penalty to Peebles gave them an opportunity of their own, only to be scuppered by solid SM defence.

With fifteen minutes played and neither side getting into their accustomed stride, the arm wrestle encounter continued. SM were no doubt feeling the pressure at this stage but were soaking it up. At last, after making good use of the limited possession, a penalty and a line-out, we launched a successful drive; Chris Baikie claimed the touch down and, after twenty-five minutes of error strewn play, it was SM 5 - Peebles 0.

Was this the turning point?

Not really! The scrappy affair continued with more handling errors and penalties. An injury to Geoff Angco saw James Ferguson coming on as a temporary replacement around the half hour mark. The pattern of play remained the same, though, as Peebles continued their attacks. They did manage to get over the try line, only for the 'score' to be chalked off due to a forward pass. Sighs of relief from the SM faithful evaporated into the cold air above the stand - gosh, it was edgy! Small margins can change games, though, and, as half time approached, SM almost managed a repeat of their first try - but the referee had other ideas. Danny Morrison came close to adding another five points but the frantic, scrappy, and (at times) tense first half soon came to an end. 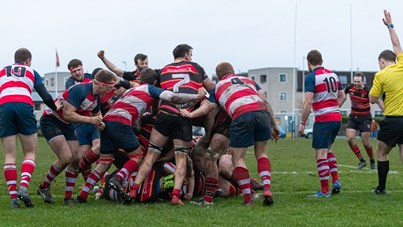 It is always difficult to know what the second half will bring but there were signs that momentum was possibly moving in our direction as the match resumed, with Peebles being restrained in their own half. The green scrum cap of Scott Alldritt was a welcome sight as he entered the fray, making significant yards well into the Peebles half. An injury to a Peebles player held up play for a short period but the pressure was soon back on our visitors as we began to 'click' with the forwards pressurising their opponents, winning territory and penalties in abundance. Ru Mitchell had now joined the party and soon added the long awaited second try. Happy was successful with the conversion, making the score with around sixty minutes played SM 12 – Peebles 0.

At this point, injuries to our guests started to take their toll and the game moved to uncontested scrums – not something you want when big Ru is on. This allowed Peebles to make the most of their possession as they continued to move the ball cleverly to find gaps - but the Stew Mel defence, stretched at times, still managed to cope, with additional ballast having been added with George Lee in the midfield. George sure relishes the contact.

The first yellow card of the afternoon had also come Peebles' way and it wasn't long before Captain Momo rumbled over for the third try of the afternoon after a punishing maul. Seventy minutes played, SM 17 – Peebles 0.

The bonus point try was now in sight but, even with a one-man advantage, it didn’t quite happen. We almost claimed the crucial fourth try in the final moments of the game, but, as they say in farming circles, 'nearly never bulled a cow!' The darkness was descending and, and with no flood lights, it was getting harder for the players to see each other - the spectators had no chance! The final whistle signalled the end of a testing afternoon. Full Time SM 17 – Peebles 0.

A win is a win and, if you can still win against difficult opponents in challenging conditions, there has to be positivity. The score line says it all. No points for the opposition can only mean a solid defensive effort. It wasn’t the platform for free-flowing rugby but we have been here before and not come out victorious - so well done, boys! Enjoy the festive break and the well deserved rest.

We're back at Inverleith on 8th January to welcome our friends from the Kingdom of Fife, Kirkcaldy RFC. This is a good League full of good folk doing their best - let's enjoy it and see how the next few months pan out.

Thanks to Jax Mackenzie Photography for supplying the photos 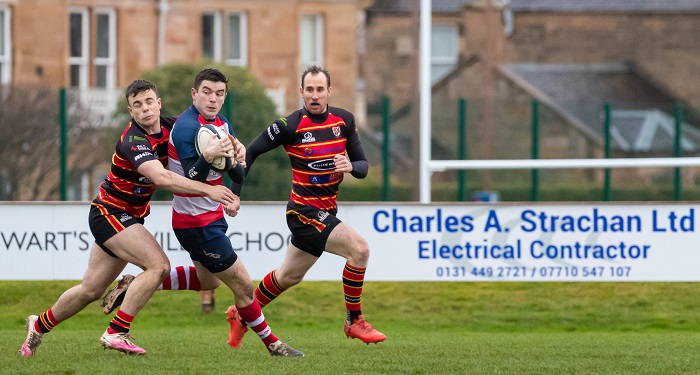 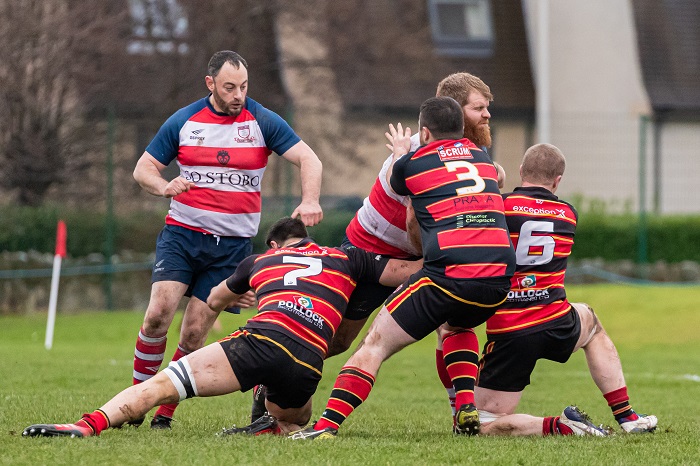 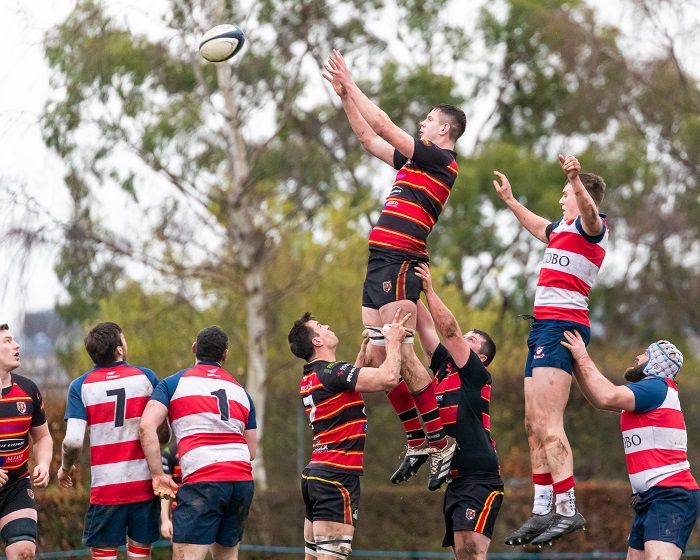 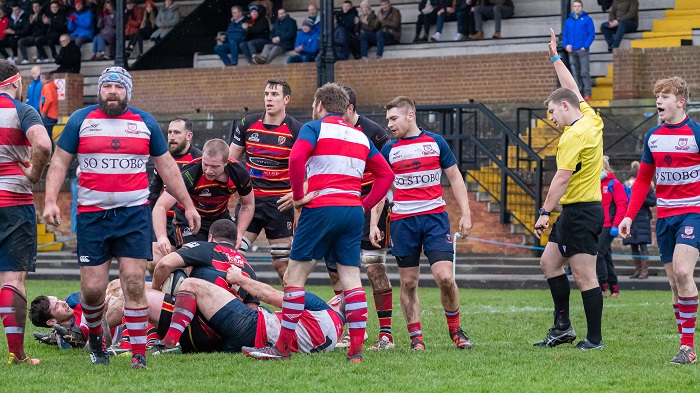 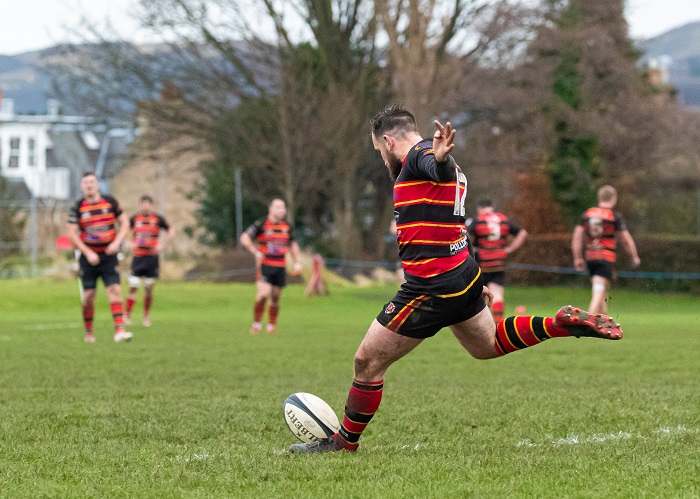 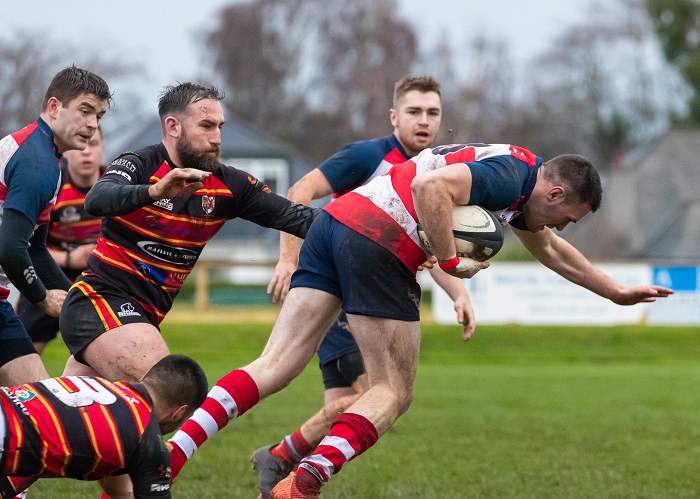 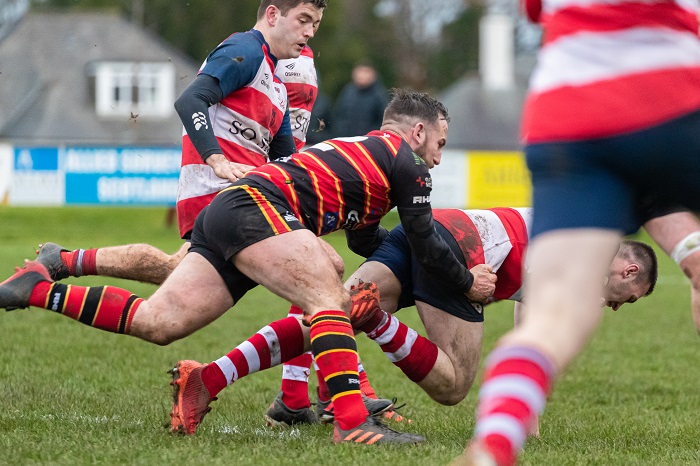 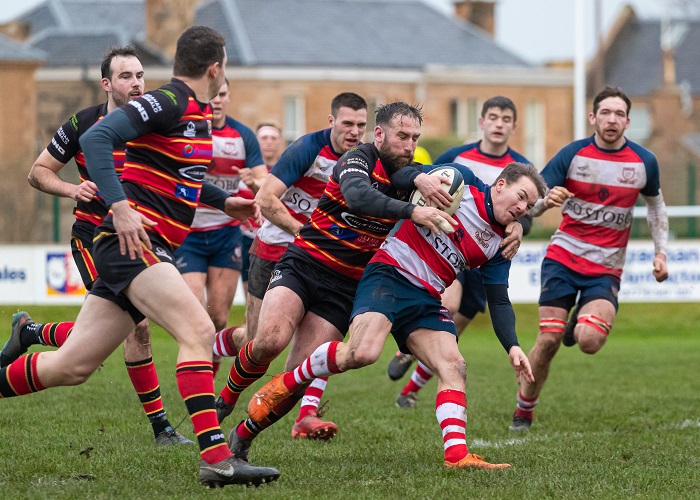 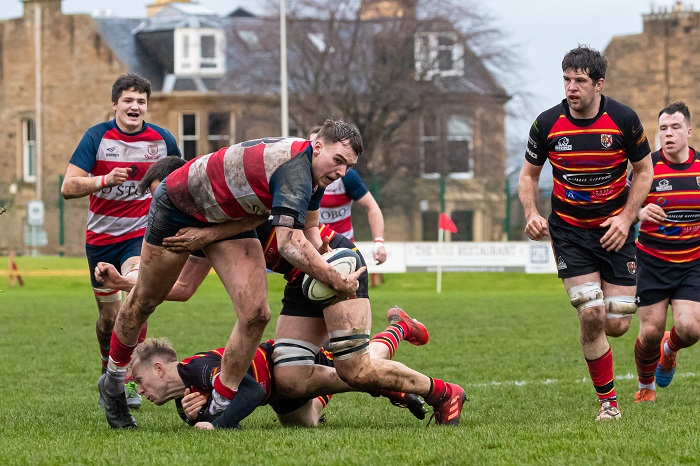 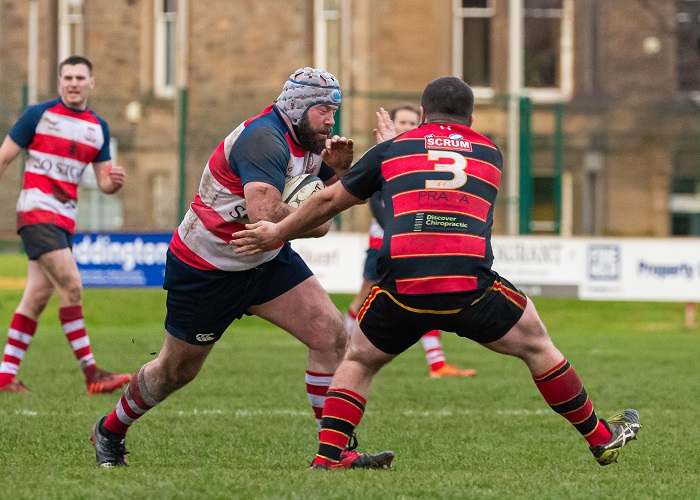 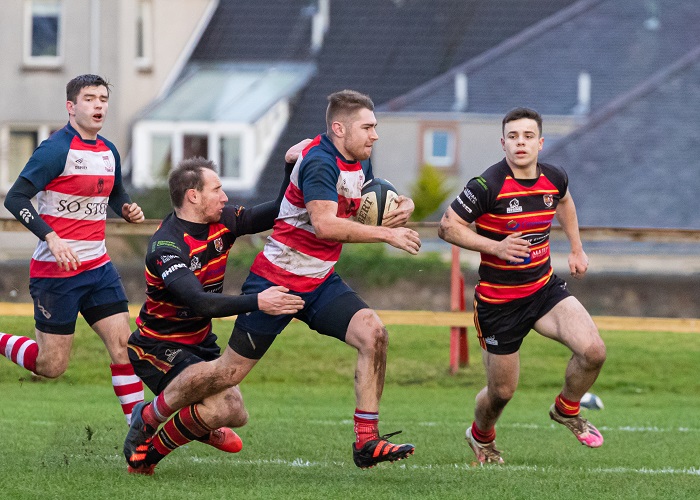 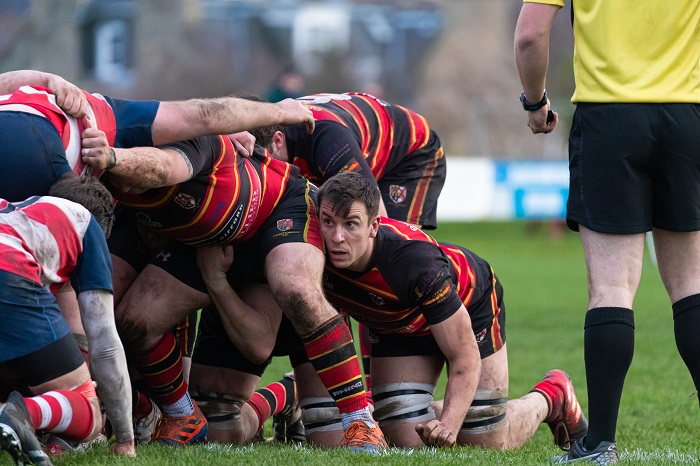 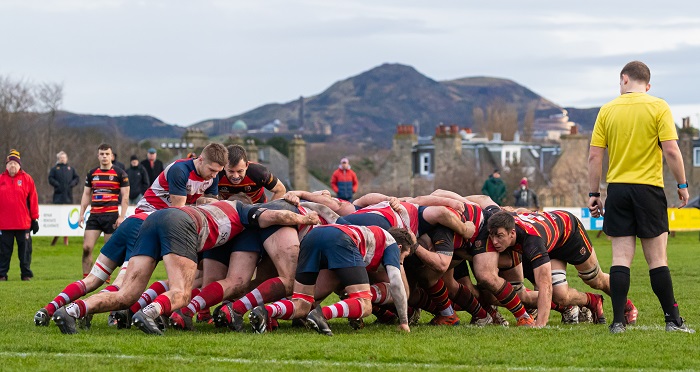 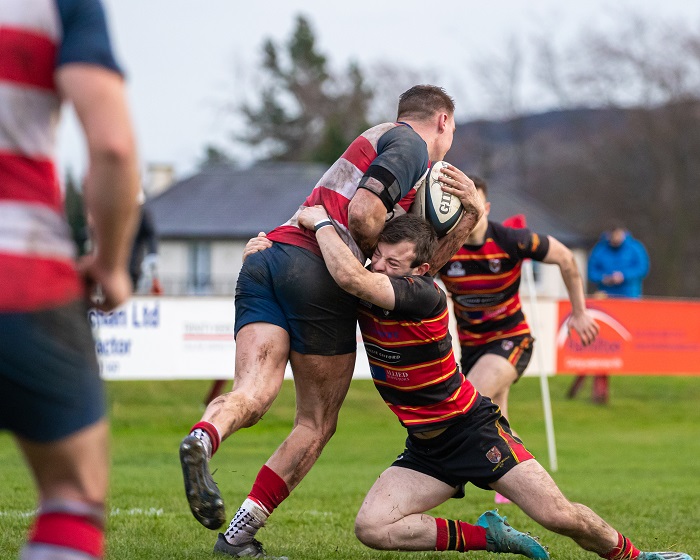 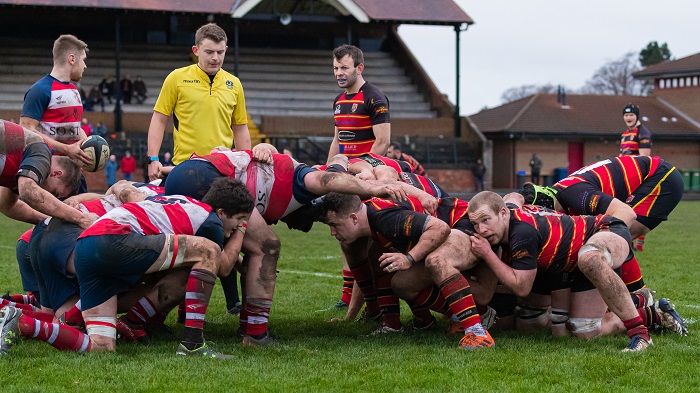 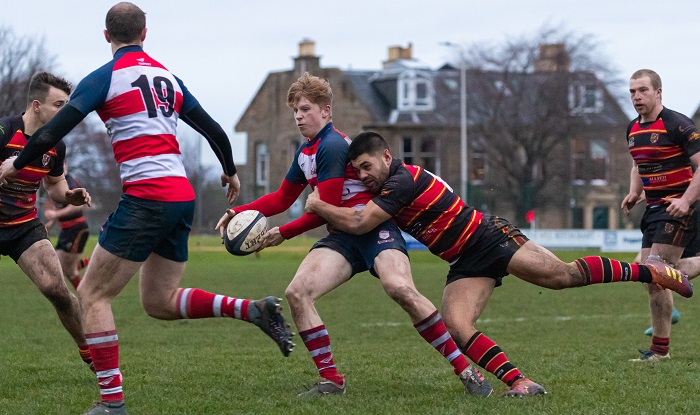 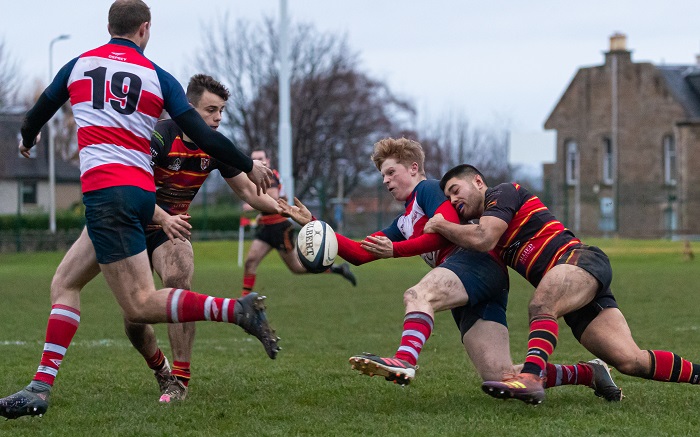 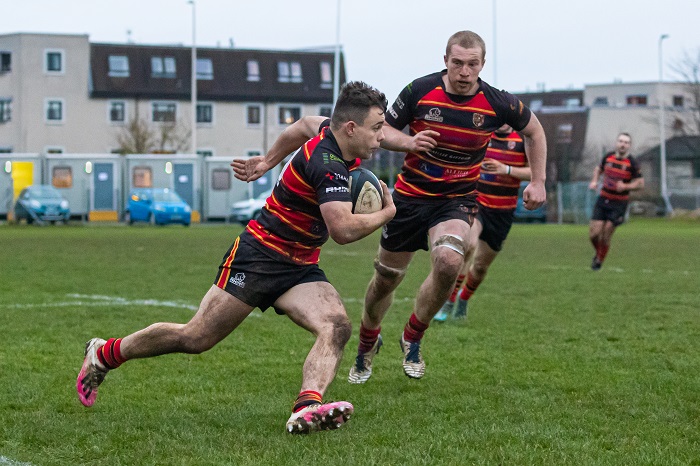 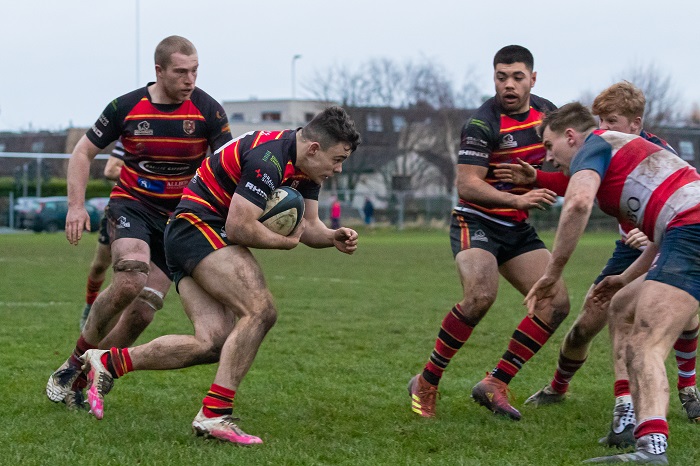 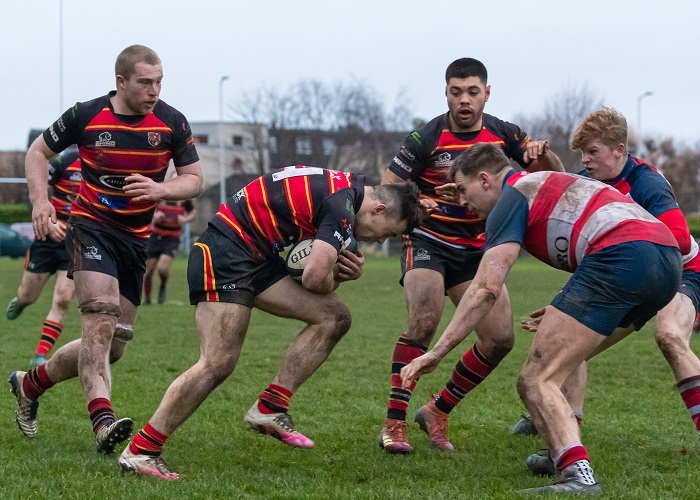 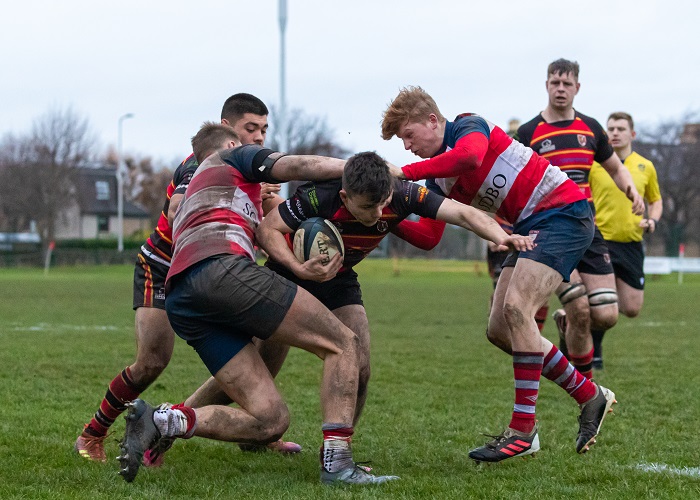 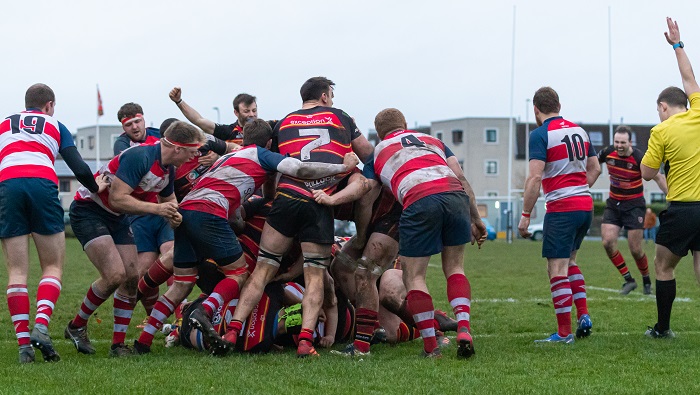 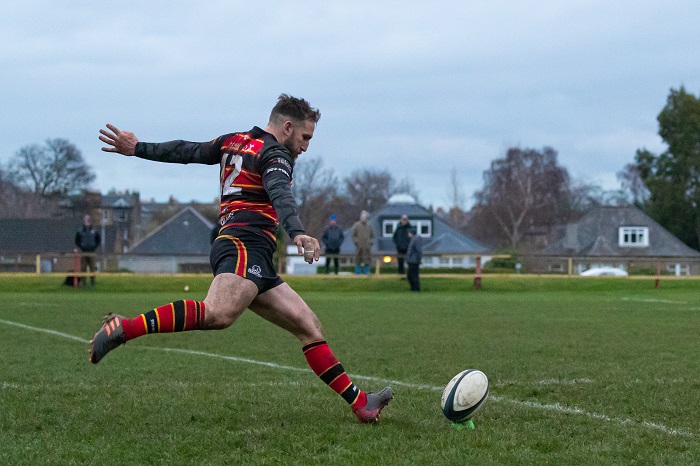 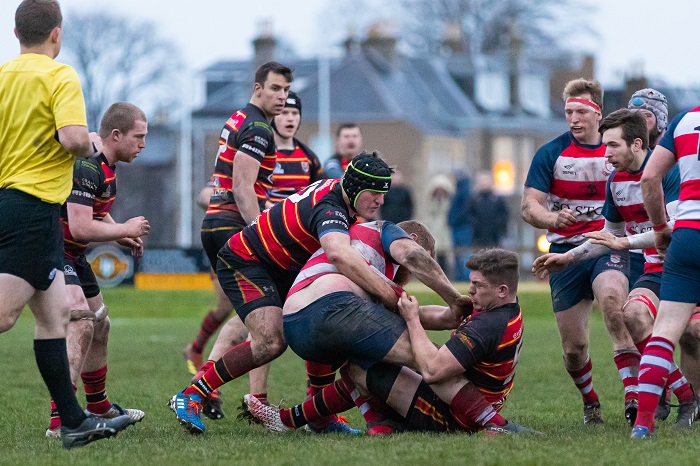 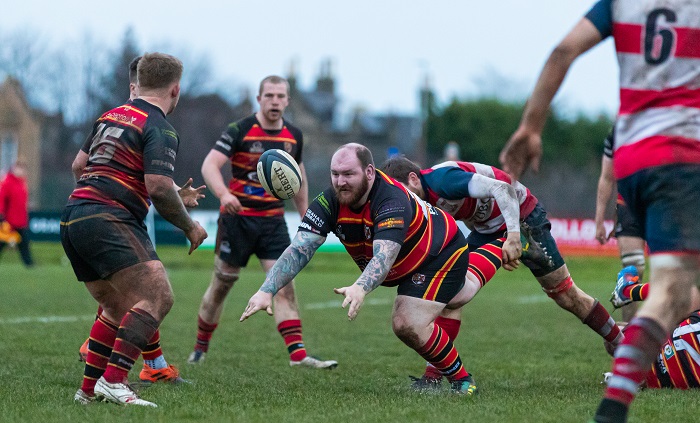