Encounters at the Gytes have always, in my experience, been closely fought contests with marginal victories or defeats. Saturday was no exception as SM, after a reasonable first half, were eventually overcome in the second by a strong and experienced Peebles pack. The only changes in the SM starting line-up saw the return of Captain Momo, with Ally Scott moving to the backrow and some shuffling of the backs with Ewan ‘Happy’ Morrison in the centre and Geoff Angco on the left wing. 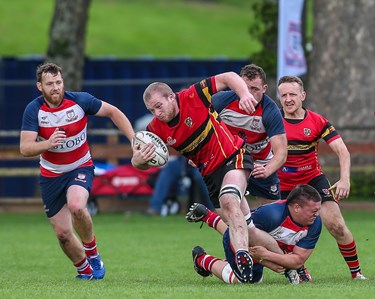 Peebles kicked off into a blustery wind which they managed effectively, probably one of the advantages of being on home turf. In contrast SM didn’t exploit it to any significant extent. It was a frantic start with an equal exchange of possession in scrums and line-outs as both teams played with intent using width whenever there was the opportunity. SM were managing to keep their hosts contained within their own half and appeared to have the edge at this stage, albeit, only just. A good scrum, a clever kick by Fraser Strachan and chase eventually resulted in the first try of the afternoon after a defensive fumble, a loose ball on offer, Sean Murchie pounced over the line to score in the corner. The conversion was always going to be difficult. 10 minutes Peebles 0 – SM 5.

Peebles continued to keep the ball alive making progress up to the halfway line but a well worked turnover by Geoff Angco took the pressure off. Although the resulting line-out didn’t function as hoped Peebles managed to clear their lines. More territory was now coming Peebles way and despite some good tackling in midfield, exemplified by the hard-hitting Jamie McGurk, Peebles managed to launch numerous attacks which eventually paid dividends with an unconverted try. 20 minutes played Peebles 5 - SM 5.

The light drizzle abated and with the sun breaking through play continued, again mainly around the half way line. 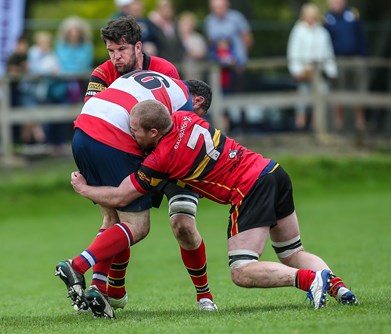 With forward pressure exerted, Darren Miller powered over to put SM into the lead once more with Kyle Henderson adding the extras. Around 35 minutes played Peebles 5 – SM 12. As play resumed, and whilst SM were managing to show some positive signs, possession was too easily lost and Peebles continued their assault whenever possible and despite some resolute defence from SM, they changed tactics, moved the ball quickly wide and breached the line in the corner for an unconverted try.

As the second half got underway Peebles were beginning to exert more pressure in the scrums and this eventually led to a penalty and an easy 3 points to give them the lead with around 50 minutes played Peebles 13 – SM 12. The reaction from SM was evident, retaining possession, kicking for territory and a clean line out and with a number of penalties in their favour, enabling a successful drive to the line as Darren Miller was over once more for his second of the afternoon with SM regaining the lead at around 55 minutes played. Peebles 13 – SM 17. 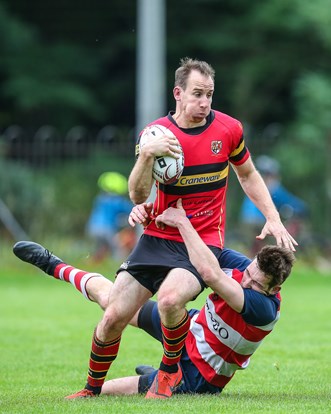 Peebles were however soon back in the driving seat and continued their attack where the dominance of their scrum was now beginning to tell as SM were pushed back at the set piece on numerous occasions. The only option being for no.8 Scott Alldritt to pick up whenever and wherever possible to stop the onslaught. Peebles were also using width to affect and seemed to have space each and every time stretching SM’s defence. The try soon came putting Peebles into the lead once more with around 65 minutes played. As Ewan Bowen got things going at the restart an over eager tackle was deemed to be high resulting in a yellow card to SM. Whilst this may not have helped the cause, Peebles were clearly starting to turn the screw and were awarded another penalty and gladly took the 3 points bringing the score to Peebles 21 - SM 17.

As the full-time whistle beckoned SM had opportunities and could have possibly got over for another try but it wasn’t to be with Peebles taking the spoils deservedly. SM did come away with a losing bonus point.

A tough afternoon indeed and Peebles were ultimately too strong in the scrum and played to their strengths. As always there were many positives from SM who are still showing what they are capable of. Some outstanding performances once more from Danny Morrison and Niall Hall who were certainly up for it and George Lee looked very comfortable slotting in at centre. Onwards and upwards to Kirkcaldy next week at Beveridge Park who had a marginal victory over Peebles the previous week.