It has been 539 days since we were last gathered at Inverleith so it was a poignant day indeed as a respectful and respected one minutes silence was observed prior to kick off.

Although there were a significant number of “well kent” names on the team sheet there were more than a few new ones which all bodes well for the season ahead. The mix of youth and experience, and of course the coaching duo of Alex Hagart and John Hardie, will drive ambition forward. Kyle Henderson slotted in at stand-off whilst Euan Bowen dropped back to full back. Other than possibly who holds down the tight head berth, these two key changes are in particularly influential positions. Stew Mel kicked off towards the Castle on what can only be described as a perfect day for rugby on a pristine pitch. Whitecraigs were kept pinned down in their own half and although penalties were being exchanged, the SM forwards prevented any significant territorial gain by the visitors but eventually WC managed to clear their lines.

A good SM lineout and break by Danny Morrison, supported by Scott Alldritt, made limited progress as further penalties were conceded. Possession was soon however swiftly regained as James Ferguson broke through but unfortunately his peripheral vision malfunctioned with the support screaming on either side (easy for me to say sitting elevated in the stand!) but he soon made amends by powering through to score under the posts minutes later, Kyle Henderson adding the extras. 12 minutes SM 7 – WC 0.

At the restart Scott Alldritt made ground but a sound defensive effort from WC forced play into touch for a lineout which they successfully used to launch an attack with width pushing into SM’s 22 for the first time and for their efforts were awarded by a kickable penalty. 20 minutes in SM 7 – WC 3. It wasn’t long though before the pressure was back on WC within their own half and yet another powerful break by James F provided more territory for his hungry pack to exploit. A brief relapse due to injury to Jamie McGurk followed but thankfully not resulting in anything more than a regaining of composure. His departure would have been a big loss for sure in both attack and defence. As the clock ticked towards half time the pressure on WC was there but no points to show. The scrum was effective and undoubtedly at this stage in the ascendency. The first yellow card inevitably came, the recipient being SM during a period of play that can only be described as a ‘dogged affair’ as the first half came to a close with the score line unchanged.

The second half eventually got SM going despite conceding 3 points at the 41st minute. Ru Mitchell had now entered the fray and made his presence immediately known. At this stage SM were still with 14 men on the pitch but were awarded a penalty and with it another 3 points from Kyle’s left boot. 45 minutes played SM 10 – WC 6.

With momentum now beginning to show the forwards appeared to be enjoying their afternoon with good line-outs and impressive scrums pushing their opponents back at every opportunity resulted in Danny Morrison eventually diving over at around the 50 minute mark for a well-deserved team and individual try. SM 15 – WC 6. A similar pattern of play continued and with WC receiving their yellow card and a try soon came SM’s way this time Darren Miller with 57 minutes played. SM 20 – WC 6 It was pleasing to see that both forwards and backs were keeping the ball alive wherever possible with some good hands eager to keep the score line ticking over generously and they knew they were capable of doing exactly that. The fourth try and the bonus point soon came. This time it was Ru Mitchell’s turn to add to his front row colleague’s tally. SM 25 – WC 6 with around 18 minutes left to play. At this stage there was really no way back for WC who were now under the cosh but, as always, continued to fight back. The fifth try then came, a nice break by Kyle who fed his eager sub Tom Keddari who had a clear run to the line, the conversion being successful. Final score SM 32 – WC 6.

It was, as the old cliché goes, a game of two halves. The first being almost a settling in period when although there was some dominance, Whitecraigs did not make it easy and exploited any inevitable early season mistakes and were the beneficiaries of numerous penalties. The ‘holding on’ being strictly interpreted something the players will need to be mindful of in the future. The second half did eventually produce some exciting rugby and the intent was there to do exactly that but it was to be a forwards day and the repetition of clean lineouts and clinical drives produced three tries courtesy of the front row. Whilst the experience of Jamie Sword, Scott Alldritt and Ru Mitchell led from the front, I think special mention to Danny Morrison and Niall Hall who put in massive shifts. A satisfactory result at the end of the day and, as always, lots to work on before our visit to Peebles for what will be, as always, a tough encounter at the Gytes. 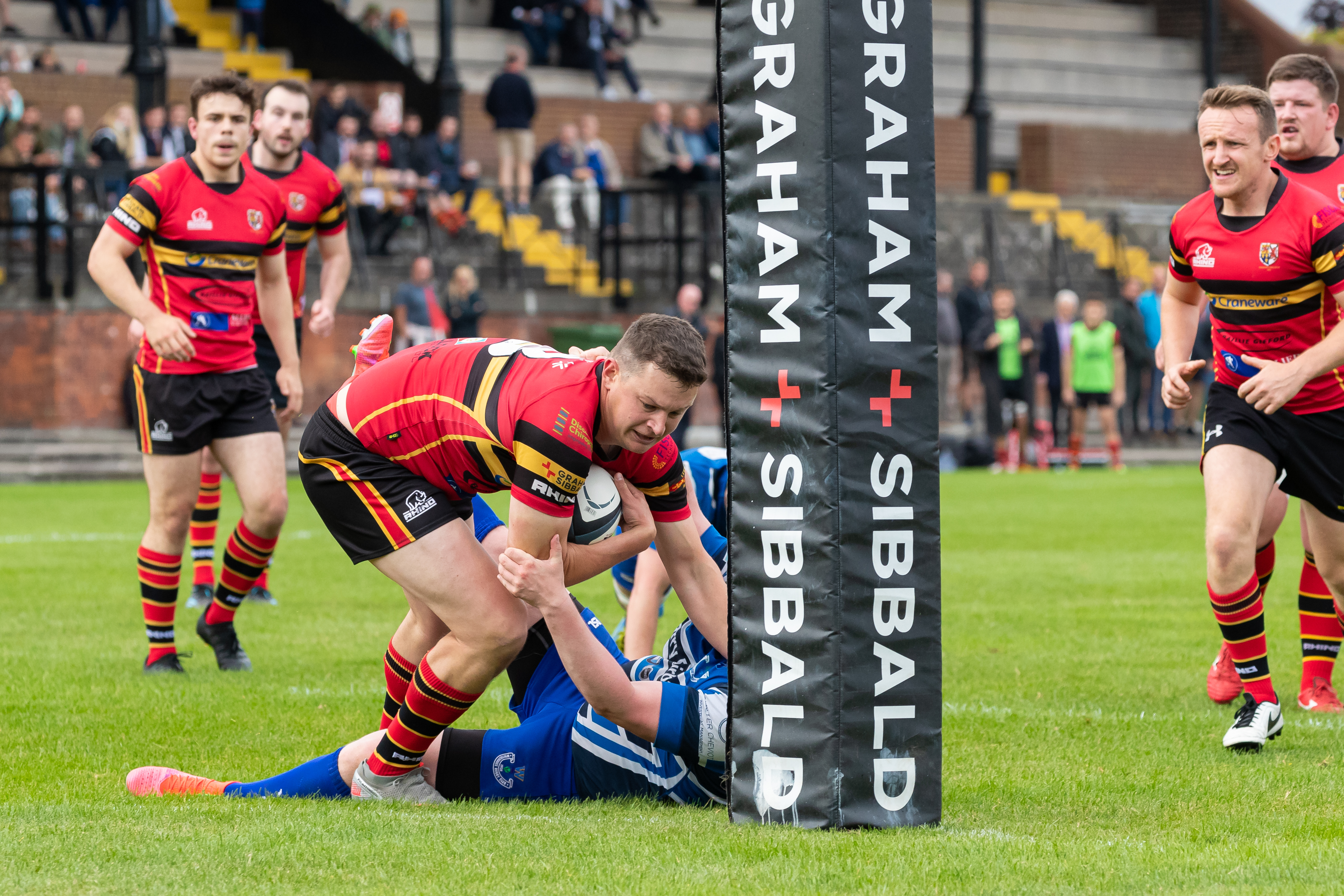