Nothing was left to chance yesterday.

The Committee met on Thursday for a final run through of protocols to welcome our friends from Whitecraigs RFC, safely. The temporary changing Portacabins, in situ till the New Year, were thoroughly cleaned down and fit for purpose. Sure, it was a tight squeeze time wise, but the school, Willie Purdie and his team pulled out all the stops to ensure all systems were go for our first game of the season. Add to that the tried and trusted Denise, Joyce and Lindsey, all back in harness, ensured also that come 12.30 the Clubhouse was open and ready to kick on from where we left off eighteen months back. No-one was to be disappointed and I hope no-one was.

The lunch was a triumph in itself as seventy members and guests sat down to hear Alex Hagart, our Head Coach, outline the coaching structure and ambitions of the players for this season. A quick introduction by your scribe and our new Chairman, Keith Schorah, was warmly welcomed into the fold. There is absolutely no doubt in my mind that Keith will bring a much-needed fresh perspective to the Club. If we are to gain promotion, then not only will we require increased revenue streams, we will need more volunteers and whilst Keith, together with his wife Liz, will bring fresh legs, they cannot do this alone. Your Club needs you it's as simple as that! 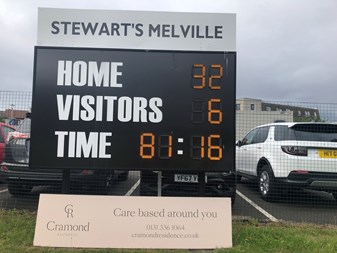 But we have the tools for now and from a slightly anxious start we managed to finish strongly. Our pack is simply immense and with us nearly at full strength, it proved to be too much for a highly spirited Whitecraigs team. They proved to be very stuffy for the first half turning round only 10-6 down. But our fitness was greater though and, come full time, a 32-6 score-line probably was a fair reflection of the action. That said, Whitecraigs will surprise a few sides, especially at home, with their strong band of vocal supporters.

With Doug Randall now back home in Exeter, Danny Morrison from Dunfermline is holding down the hooker's berth. In the same mould as Doug, he's a feisty competitor for sure bringing an edge to us up front whilst Darren Miller continues to grow into the loose head role. There's no doubt that our pack of forwards is our strength but they will need to be on it, every match, if we are to secure the promotion, we are all craving for. I don't quite know how we do it but yet another giant of a man, Courtney West, has pitched up from Ponteland just adding to the party on the blind side flank. He had a good solid game for a first start and I sense there's a real player in there too. He will flourish alongside our favourite Frenchman, Scott Alldritt but so dominant were we at scrum time even Scott struggled to manage the ball at the back of the scrum!

When Danny Morrison scored from a rolling maul, sealing the bonus point, late on in the second half, he was frankly unstoppable. We must replicate that power week on week though.

So, onto the Gytes next week where Peebles RFC will be our hosts. They had a close run in with Kirkcaldy up at Beveridge Park losing out by only a few points. They will be keen to get their season up and running for sure and whilst winning at home is relatively straightforward....... winning away takes a might more steel.